One hundred thirteen tunnels have been DISCOVERED by US Authorities running under the border from the Mexico to the United States in the past ten years. (Connect to the story on FOX NEWS)
Some of the number were not completed when the the Bureau of Immigration and Customs Enforcement, the Drug Enforcement Administration or county and municipal law enforcement officers found them. They’d seem to be difficult and time consuming to complete. 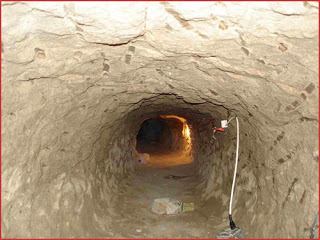 In the story referenced above, a tunnel took a year to dig and was only in operation for one month before it was discovered. ICE agents intercepted a truck leaving the warehouse and discovered 20,000 pounds of marijuana. An additional 32,000 pounds were found in 10-kilo bricks throughout the warehouse, making it the second largest seizure of marijuana in U.S. history.
Authorities said an underground passage located on Thursday (Thanksgiving Day) was similar to one found earlier – both running around 610 meters from Mexico to San Diego and equipped with lighting, ventilation, and a rail system for drugs to be carried on a small cart. (LINK)
The tunnels are believed to be the work of Mexico’s Sinaloa cartel, also known as The Federation. “We think ultimately they are controlled by the same overall cartel but that the tunnels were being managed and run independently by different cells operating within the same organisation,” Mr Unzueta, a spokesman for ICE, said on Friday.
The tunnel found on Thursday is more than seven football fields in length and extends from the kitchen of a home in Tijuana, Mexico, to two warehouses in San Diego’s Otay Mesa industrial district.