Hillary, Barack and the Stain of Benghazi 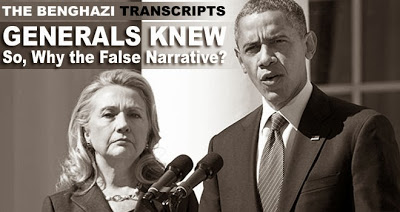 Facebook
Twitter
Pinterest
WhatsApp
Since New Year’s Day 2014, Presidential Candidate Hillary R. Clinton (unannounced) has been calling in favors at the New York Times and throughout the mainstream media to spike the Benghazi narrative and fall back to the lame lies that were spread soon after the attack by the Obama Administration.

In 2009 Somali pirates hijacked the Maersk Alabama, a cargo ship flying the American flag, and took the ship’s captain, Richard Phillips, for ransom.
The United States Navy dispatched three warships, two helicopters and a surveillance drone and parachuted in the famous Navy SEAL Team 6 to rescue Phillips in a six-day feat portrayed in the newly released movie “Captain Phillips.”
Anyone watching this real-life thriller will ask: Why wasn’t a similar rescue mounted at Benghazi, Libya, where Ambassador Christopher Stevens and other Americans were attacked on Sept. 11, 2012?

Why DIDN’T the Obama Administration (and Hillary Clinton) want the US Military on the ground in Benghazi? CNN arrived at the Benghazi Consulate and CIA Annex before the military did…

WHAT DOES HILLARY CLINTON (the Bitch of Benghazi) HAVE TO HIDE?

Why was Ambassador Stevens really in Benghazi, a city noted for its violence toward westerners without a protection detail? Why did he stay in a consulate compound on the anniversary of the September 11, 2001 attack on the World Trade Center — where 30 feet of wall had been recently breeched by explosives? Who was he scheduled to REALLY meet with? Did he have a large sum of money (in gold) with him on the premises? What was it supposed to buy Hillary?  When those questions are answered truthfully, the question of what the Beast of Benghazi is hiding from view will also be answered.
What could be so embarrassing to Hillary Clinton that she would demand such an elaborate web of lies to cover it? What could possibly have happened that we don’t yet know about that might have disqualified her from the Presidency?
Does it involve MANPADS?  (surface to air missiles)