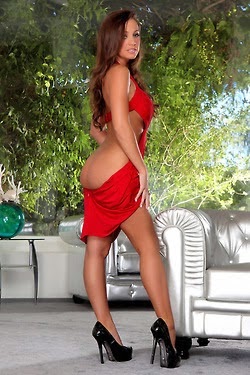 Facebook
Twitter
Pinterest
WhatsApp
A Chance Encounter in the Temple of the Living Elvis (Las Vegas)
I stood next to the Consumer Electronics Show desk at the MGM Grand Hotel in Las Vegas, Nevada. It’s the place where you stand in a (shorter) line to pick up your pass before you descend into the basement to board a monorail to the Convention Center.

There were a number of conventioneers present and a bunched delegation from Senegal were speaking loudly in French. Sadly, I do understand French, but apparently not when it’s spoken in Senegal.

She sauntered up to the Senegalese men standing near me, and spoke in passable French to them wearing a shimmering terra-cotta colored satin ‘not quite a wraparound’ dress. (It looked as if somebody TRIED to stuff bratwurst into a garden hose) What I mean by that description is that it should have wrapped around but it fastened well too short of that goal, and as a result, her breasts kept on coming out of her dress. I found the situation amusingly horrifying that she had that particular euro penchant for dispensing with cumbersome undergarments. She wore a ‘Brazilian’. The fact that I could confirm that at first glance, gives you the sense of the lady, if I can call her that. The men from Senegal will confirm my observation if they pass by this blog.

European women (monied and destitute alike) often come across as being filled with the pent up frustration of liberalism and the venom that can only originate in a “progressive” culture. The older they get, the more seasoned and bitter they become, much like the news hosts on MSNBC. Ignored by the Senegalese, she spoke to me, switching to English. Apparently my aging and affluent (or effluent as you prefer) tarnished looks didn’t translate into the EuroTrash model. I took it as a compliment.

“Are you staying here?”
“Yes I am,” My hand shot out, “Jim Willoughby from New Orleans, and you are?”
“My name is Bambi.”
I had to suspend disbelief, because even though I almost used Jack’s name (Blogger WoFat) fraudulently, I knew for a fact that there was a Bambi in The Big Easy…
“Have you ever been to New Orleans?”
“No.” (what a pity, not the same Bambi) Bambi looked forty-five, real age about 30. She was just mildly unattractive in a soured vinegar and water solution kind of way. At this point she may have read my body language a bit more clearly. “Ok, my name is Melusina. I will go up to your room with you?”

I looked at the sloppy, slurring, sweat stained trout and smilingly said that I had other plans.

“For four hundred dollars?” She mentioned money and ok, I’m a whore.
“Ok, yes, for four hundred dollars.”
She smiled for the first time and yes, the pancake make up actually did crack on one side of her face. Taking me by the hand, we walked toward the elevators. I commented, this time in French, Las Vegas est la ville des rêves, that Las Vegas truly is a city of dreams. Not only could you indulge your vices, but women come up and offer to pay you four hundred dollars to have sex with them.
She stopped, confused, breast slinging out of the loose top as she pivoted toward me, “No, you pay me four hundred dollars.”
I replied, “I don’t have four hundred dollars, I thought that you were going to pay me to have sex with you. Honestly, I need the money right now, though all you’d get for that is the opportunity to blow me with a party hat on.”
Bambi/Melusina pivoted the other way, giving me an ugly pout, her breast loosely re-seating itself in the dress, and stalked off, unfulfilled and unloved – and I didn’t make $400…