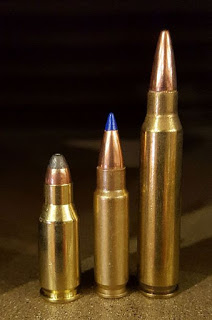 Facebook
Twitter
Pinterest
WhatsApp
The editorial staff of Virtual Mirage runs into interesting things all of the time, that the average person might not find interesting… which may be why this blog exists. I became aware that the drug cartels in Northern Mexico are using the .22 Tuason Craig Micromagnum or .22 TCM cartridge in connection with Rock Island Armory and Glock conversions. Those of you who are firearms enthusiasts might find that to be a bit exotic for drug cartels, but they do seem to like this option.
It’s a type of wildcat round, created from a 5.56×45 NATO cartridge case, shortened so that the shoulder is about the same length as a .38 Super cartridge, created by Rock Island Armory.
Mexican drug cartels have favored the .38 Super for years because of laws in Mexico. 9x19mm Parabellum and .45 ACP rounds are deemed to be military weapons in Mexico and possession of firearms chambered so, or ammunition carry a higher sentence than a .38 Special or Super, which are not military weapons according to Mexican law. The public can be licensed to carry .38 Super auto, but not 9mm.
A sub variant of the .22 TCM is the 9R. That is the version with a more deeply seated bullet designed for use in Glock 9mm magazines. They fire a 40gr. JHP. The .22 TCM9R is the favored cartridge within that family.
The round, fired from a Glock, fitted with a silencer, is the preferred combination. However, to get it really silent, you need to hand-load the .22 TCM9R to insure that the round itself is sub-sonic. The cartel folks haven’t figured that out yet because based on my research, they use factory ammunition.