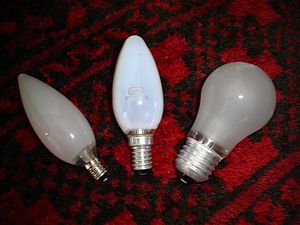 Let there be LIGHT?

Have you had enough of the hope and change? $5 gas, no coal for power, GM sponsoring films lauding China’s communist party, Winn Hotels and resorts moves home office to China, and 20% of Obamacare waivers going to Pelosi’s district? The Federal Government is about to ban 100 watt light bulbs to help you conserve energy…because they care about YOU.
To encourage energy efficiency, Congress passed a law in 2007 mandating that bulbs producing 100 watts worth of light meet certain efficiency goals, starting in 2012. Conventional light bulbs don’t meet those goals, so the law will prohibit making or importing them. The same rule will start applying to remaining bulbs 40 watts and above in 2014.

Enter the $50 light bulb! And you thought Cold Fluorescent Bulbs were expensive?

Their demonstrations at the LightFair trade show in Philadelphia this week mean that brighter LED bulbs will likely go on sale next year, but after a government ban takes effect.

The new bulbs will also be expensive — about $50 each — so the development may not prevent consumers from hoarding traditional bulbs.

So in the new world of Atlas Shrugged, only the rich will be able to afford light bulbs. The rest of us will have to do with globes dimmer than 20 watts or go with the $50 a shot LED’s. Additionally, the LED bulbs are expected to have a shorter burn life than present bulbs.
Perhaps we should return to chandeliers with candles burning brightly to light our homes? I’d recommend coal oil lamps, but it’s a coal product and that is forbidden. So far the EPA has not banned candles, but I don’t think that’s as farfetched as it sounds.