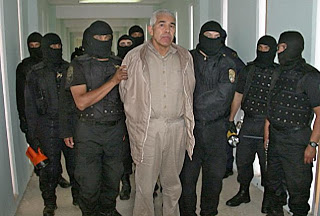 He’s Headed for China — Raphael Caro Quintero (Raffa to his friends) was released from prison in Mexico, and he’s on his way to his new home in the Worker’s Paradise.

(NY Daily News) Rafael Caro Quintero – a founding member of one of Mexico’s earliest and biggest drug cartels – served 28 years of a 60-year sentence for the 1985 kidnapping and murder of DEA agent Enrique Camarena. Some experts argued the move was part of the country’s effort to strengthen defendants’ rights, but others disagree. Rafael Caro Quintero, 60, stepped out of a Jalisco state prison early Friday, after serving 28 years of a 40-year sentence he was given for the 1985 kidnapping and killing of DEA agent Enrique Camarena, officials said.

He’s headed for China and will be there by Monday so that the US Government won’t be able to extradite him back to face American justice.
“Raffa” has been serving time in prison but he was a frequent visitor at important family events outside prison. Two weeks ago he attended a quinceanera in Guadalajara, for example. Based on best information, he spent the weekends free to roam around, meet friends and stretch his legs. His prison cell more closely resembled a suite at the Four Seasons Hotel in Puerto Vallarta.
Why China?

China has been the destination of choice for billions in cartel money over the past six months as the major cartel operations have been divesting themselves of assets in Mexico. China has embraced the money and is prepared to give kingpins asylum from both Mexican and American justice. — Because it can.
American weakness of spirit, timid, tepid leadership and moral ambiguity has left the US in a position where other nations feel empowered to do whatever they please no matter how offensive it turns out to be to the United States. Barack Hussein Obama has been the cheerleader for American weakness. The Great Apologist is viewed around the world as an open and running joke. And the Chinese will do whatever they want to because they know that there will be no consequences from Washington.