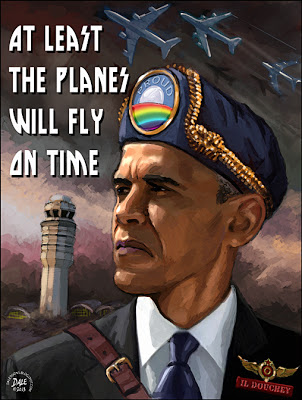 I suspect that David Axelrod came up with the idea of stacking up airline travel in an attempt to alienate business travelers and grandparents flying to see their grandkids. As the summer vacationing season approaches (another ‘summer of recovery’) with economic growth at around a dismal 1% so far this year, the Obama Administration decided to turn a 4% cutback at FAA (after a 20% growth in funding under the previous four years his administration) into a 40% cut back in air traffic controllers. And the “blame Bush strategy” of the first four years of this regime would translate into the “blame the Republicans” mantra of the next four.
But it didn’t work.

The Carter Years in America are not looked back upon as “good times”. As one who lived through them, I can assure you that Carter was (and still is) a stain on American history. But Jimmy Carter, for all of his weakness and for all of his stupid stunts, never  actively took steps to punish the American people when things didn’t go his way as Obama has with the sequester. Carter was a boob. Obama is divisive because of who he is personally.

The Obama push to pare back the Bill of Rights, including his all-out assault on the Second Amendment ended in defeat in the Democratic Party-controlled US Senate, before it could get to the Republican-controlled House where Obama planned to rant and take his case on the road, howling about the evil Republicans. So that didn’t go his way either.
But we have ObamaCare. And it won’t remain a legacy of this presidency in any positive way because that is one turkey that will end up being repealed in the same way that the Volstead Act went down in flames (Prohibition, circa 1919-1933).
Ignoring his own “red lines” in Syria and Iran simply makes Barack Obama look impotent and emboldens the radical Islamic World. Last year’s Arab Spring and the promise of hope and change in the vast ghetto that is the greater part of North Africa’s Arab Nations melted down into al Qaeda control and the further rise of the Muslim Brotherhood. Benghazi put the last nail in  coffin of the Obama thrill ride that culminated in the killing of Osama bin Laden.

The Obama Administration had its pants pulled down around its ankles with the Boston Marathon bombing.

Tamerlan Tsarnaev was apparently too dangerous to be allowed to go to Mecca, but not Boston. Saudi Arabia unofficially says that if Janet Napolitano read her mail, the Boston bombing might have been prevented.

Britain’s Daily Mail reported Tuesday that, according to a senior Saudi Arabian official, the Saudi government last year issued a written warning to our Department of Homeland Security about the danger of Tamerlan Tsarnaev, the dead lead suspect in last month’s Boston Marathon bombings.

Separate from Moscow’s now-famous multiple warnings about Tsarnaev, the Saudi alert “was based on human intelligence developed independently in Yemen,” according to the U.K. paper, and the Islamic kingdom’s concerns were serious enough that the Chechnya native was reportedly denied a visa in December 2011 for a pilgrimage to Mecca.

The Saudi warning, also received by the British government according to the Mail, “did name Tamerlan specifically,” as well as three Pakistanis, as potential jihadists, and “was sent to the Department of Homeland Security at the highest level.”

According to Fox News, both the DHS and the White House deny receiving such written communication…but we know that they’re lying because they ALWAYS lie. 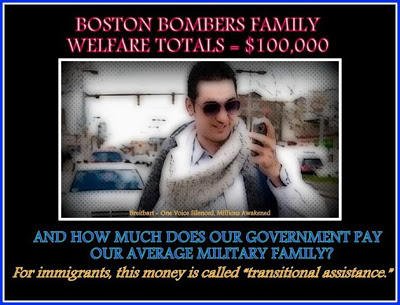 And we’ve completed the first four months
of what promises to be a very long four years.