A new style $100 bill will enter circulation on October 8th, 2013. The new note was unveiled in 2010 and includes a number of new security features, including a blue 3D security ribbon and a disappearing Liberty Bell inside an orange inkwell that is more difficult for counterfeiters to replicate. 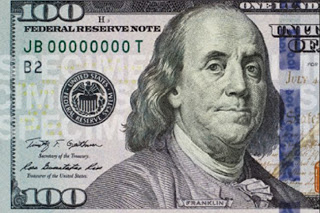 How strange – a nation that doesn’t control it’s own money.