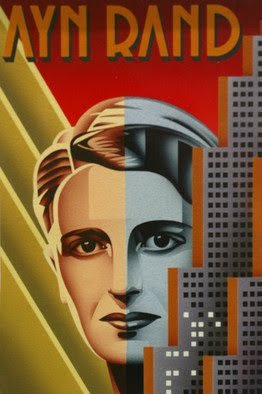 Ayn came to the United States from Soviet Russia. She brought with her insight based on experience into the destructive nature of socialism. In her seminal work, ATLAS SHRUGGED, she outlined how politicians invariably respond to crises that for the most part they, themselves create, by spawning new government programs and laws to regulate the carnage they wrought. These programs, in turn create more havoc and poverty which causes politicians to create more programs. It’s a death spiral where productive sectors of society are sacrificed under the collective weight of taxes and regulatory burdens imposed under the rubric of diversity, equality and fairness.

In her book the relentless redistributionists are continually creating new and more futile programs which carry with them benevolent-sounding titles such as the “Anti Greed Act” (reminds me of the GIVE Act President Obama signed into law in April 09) which promises to shear the rich of their money, and the “Equalization of Opportunity Act” which prohibits people from starting more than one business. Keep in mind that Rand wrote in the 50’s. She never heard about the “AUTO FINANCING AND RESTRUCTURING ACT”, the “EMERGENCY ECONOMIC STABILIZATION ACT”, or the “AMERICA’S AFFORDABLE HEALTH CARE CHOICES ACT”. Yes, as I’ve written before, it seems that the Obama team is using Atlas Shrugged as their play book.
When profits, creativity and wealth are denigrated in society, they start to disappear and everyone is reduced financially and intellectually.
Some want to make Atlas Shrugged into a movie. I think it’s unnecessary, we’re all living the movie in the new ObamaNation – “all the world is a stage and all the men and women merely players. They have their exits and their entrances; and one man in his time plays many parts..” (Wm Shakespeare, As you Like It – Act 2 Scene 7) Maybe it would be a good movie if we could have Barack Hussein Obama play himself. But then again, we could just as easily piece it together from press conference footage and sound bites.
I recommend the book. BUY IT USED FOR ABOUT $8.50 on Amazon.com
Or you can watch it live on FOX.
(MSNBC, ABC and CBS don’t cover it)