Going out of Business 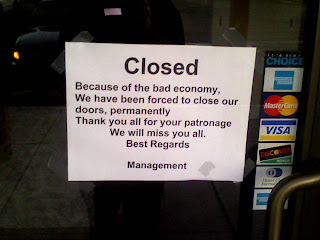 In the region of California where I live, unemployment rates are over 20%. That’s not the speculative rate, taking in those who have been unemployed so long they’re off the government’s books, the teenagers who have never been employed or the self-employed people who have been driven out of work and don’t qualify for unemployment insurance. That’s the book rate, which means the real rate is higher.

Many businesses have closed. Very few have opened. Many strip malls are empty with a few stalwarts still trying to grasp at straws. I go to businesses to buy things where I have gone before and they’re not there. Sometimes there is a sign. Sometimes no sign at all – they threw in the towel without a whisper. Not even a note.

To hear idiots like Vice President Joe (Slow Joe) Biden speak, ‘happy days are here again’, but he and his coterie of puffed up, bloated fatcats and Washington insiders must not leave the DC Beltway much. Or, more likely, they simply don’t care. Barack Hussein Obama (mmm-mmm-mmm), concerned with himself alone, is even further in the ozone.

Car dealerships that once had a large inventory on the lot, now have half a dozen or a dozen cars floored for customer’s inspection as they cope with lack of sales and credit.

I spent the day with friends at their business. I own a piece of that business. These guys are scientists. If you watch the Science Channel on television, you’ve seen them. They’re world class experts at what they do who teach at the California Institute of Technology, one used to be a professor at MIT. They create cool stuff that improves people’s lives by advancing the bar technologically. One very small security measure we’ve completed provides a very inexpensive device that will change the way people are able to secure their homes and property – well it would if we could stay in business. The manufacturers we planned to use have ALL gone out of business – and we could get the work done outside the US but there are export restrictions that extend to manufacturing. Across the board, the little company is going under because of the inability to obtain loans because money is tight. It might go under.

And for every company that fails, people are out of work. Failed companies and the unemployed do not pay taxes. The more the government makes good its promise to tax those evil, rich Americans that make over $250,000 into the poor house, the less likely those evil rich will be motivated to RISK opening businesses and employing people. I mean why bother when Barack Hussein Obama (mmm.mmm.mmm) promises to take what you earn for the sake of social leveling?

One of my best friends has a wife who is a noted computer scientist – and there aren’t even any employment ads in AMERICA for her specialty. A number of companies in India have been courting her, but she has no interest in moving to India. I just hired her husband to work for me – he was out of work. He was concerned that maybe, just maybe, they’d have to move to India just to find work. That’s the hope and change Dear Leader brought.

Welcome! You’re in the ObamaNation!! It’s a place of CHANGE that idiots voted for.   It’s just one big party here and don’t worry about illegal aliens – the Mexicans have gone home because they can’t find work either.