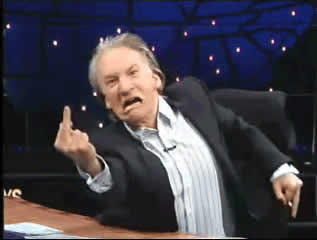 Television personality Bill Maher enjoys making fun of conservative bloggers. He feels that those of us who attend town hall meetings in opposition to the socialist agenda of the present congressional majority and executive administration.

Bill has been a strident fan of every fringe movement in America and was openly — proud — if you can call it that, of the way the terrorists rode the aircraft into the World Trade Center.
He did apologize a week later with the threat of being fired hanging like the sword of Damacles over his head. He was fired and his show was canceled. But he came back.
If Bill can’t tell SINCERE Americans from ACORN hirelings, he’s an intellectual lightweight and needs to consider his position and the fact that many Americans do not trust the government. We have good reason to view the US Government (which Bill criticizes when it’s a Republican in office) with a great deal of skepticism. We have good reason to suspect the motives of Barack Hussein Obama, who has consistently told two very different stories to the American people.
To that sincere response, Bill explains to his television audience that those who are opposed to a single payer health care system are racists, old and senile and not nearly as enlightened as he is.
Maher’s anti-town hall rant
CLICK HERE TO VIEW