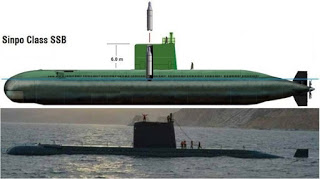 KCNA reported that the submarine was built under Chairman Kim’s “special attention” and will operate in the East Sea, aka the Sea of Japan. KCNA did not describe the kind of weapons systems the submarine contained or when the inspection took place.
Kim may have been at the Sinpo shipyard, which built the only Sinpo class ballistic missile submarine.
The Korean Central News Agency reported Kim expressed “great satisfaction” with the submarine after learning about its operational and tactical data and weapon systems.
Kim “stressed the need to steadily and reliably increase the national defense capability by directing big efforts to the development of the naval weapons and equipment such as the submarine,” according to KCNA. The article said the submarine’s operational deployment “is near at hand.”
Based on some speculation and what facts are available, the new boat appears to be a ‘stretched’ Sinpo class ballistic missile submarine.

The Sinpo carries a single Pukuksong -1 (Polaris knock-off) ballistic missile. That missile was launched successfully from the submarine in 2016. It presumably can carry a nuclear warhead because North Korea’s intercontinental ballistic missile is a land-version of this missile, called the Pukuksong-2. It was successfully launched in 2017.
The North Korean navy has 70 submarines, including 20 Romeo class and the rest are coastal or mini-submarines. Most of the boats are obsolete, noisy and only a few ever leave port.
They have been involved mostly in special forces operations in and around South Korea. A mini-submarine armed with a torpedo sank the South Korean patrol ship, Cheonan, in 2010, killing 46 of 104 crew members. At the time, Kim Jong Un, still being groomed for leadership by Kim Chong-il, supposedly authorized the sinking.
If the submarine is a new ballistic missile submarine, North Korea may be expected to test the missile ejection mechanism reasonably soon.
Hong Kong Demonstrations

After the peaceful part of the demonstration ended on 21 July, during the evening, some Hong Kong protestors, dressed in their signature black clothing, attacked the office building of the Chinese Mainland Affairs Office in Kowloon. Protestors defaced the building façade with graffiti and threw black ink on China’s national emblem.
Police managed to get control of that situation, and the next action occurred in the Yuen Long subway station.
During the night of 21 July, more than 100 men, believed to be police officers from the People’s Republic of China out of uniform, attacked pro-democracy demonstrators in the Yuen Long subway station in the New Territories. Official outlets suggested that the white shirts were members of a local Triad (gang)…sure they were…
The attackers wore white shirts, distinguishing them from their targets, most of whom wore black. The protestors generally have adopted black as their signature color. They used sticks, pipes and rattan canes to beat anyone dressed in black. The attack lasted about 30 minutes.
At least 45 people were sent to the hospital, including one in critical condition and five others seriously injured.  No white shirts were arrested.
The official statements focused on the vandalism of the Mainland Affairs Office more than on the subway attack. The vandalism was a significant escalation of the protest. It was the first time that the demonstrators took physical action against the mainland’s official presence in Hong Kong.