The day after the horrible tragedy occurred at Ft. Hood (and I’m not going to recount the grizzly details here), the BBC headline ran, “Shooting Raises Fears For Muslims In US Army“. I found that an interesting perspective and didn’t read the article because I was concerned for the safety of my computer if I did (window near). 13 innocent non-Muslims and one non-Muslim unborn child were dead. MAJ Hasan, the Muslim who shot them was alive in the hospital. 14-0 ratio.

There is a disconnect between the mass murder of fourteen innocent people and the immediate hypothetical that the murder would somehow create Muslim victims. Or am I the only one who feels this is a way WEIRD way to view this situation?

This skewed way of thinking is manifest in another bizarre theory that is floated in the mainstream media continually.  There are plentiful articles that maintain that Christianity and Judaism are just as violent as Islam. Really? Not from my perspective. If you want to go back to the crusades about a thousand years ago, you might have a point. I’d accept your argument. Today? No.

Barack Hussein Obama, the Black Liberation Theologist with the Islamic name and the Marxist dreams of his father on his mind who is commander-in-chief of the US Military seems to harbor the same concerns, thus apologies that are legion for America’s perceived sins to the rest of the world for deeds done wrong. 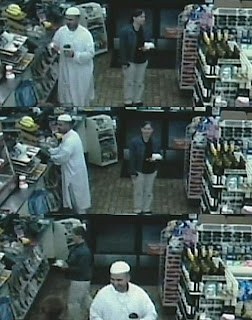 The United States and much of the world which includes Russia, China, the EU, etc. is in a war with radical Islam and we have been in that war for quite some time. Many soldiers of the United States have been killed by radical Islamists. The photos (left) of Major Nidal Hasan, dressed in Islamic garb, shopping on base illustrate his personal disconnect between the deluded jihadists world he lives/lived in and the insensitivity of his actions. Would this alone be enough for another soldier shopping at the Base Exchange justify somebody ripping off his arm and beating him over the head with it? If I was on the jury, I’d say, “yes”.
It’s time for American Jews (many of whom are liberal and think Barack Hussein Obama is a fine president) to decide who their enemies are. It’s time that we exercise intolerance of jihadists in the ranks of the US Military. If Muslims feel that my sentiments are insensitive, I don’t care.
Just My View:
(1) The United States is at war with Islamic elements who practice murder as their stock in trade. Murder becomes their faith.
(2) Muslim people’s right to freedom of religion does not extend to military service in the United States  when their core beliefs call for murder of United States soldiers/sailors/airmen.
(3) It is not discrimination to deny that service where evidence exists that individuals key religious beliefs  are jihadist.
ACLU types, take me on.