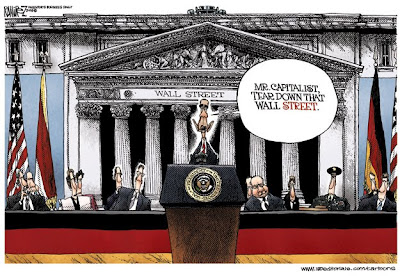 I don’t pretend to understand Barack Hussein Obama, America’s DEAR LEADER. I don’t think it’s about being black or white. I know plenty of black people who own businesses and prosper under a free market, so that can’t be it. Even Obama’s best friend, Oprah Winfrey is a raging capitalist, shoveling in the money from Harpo Productions. Skin color is a red herring on this issue (pun intended).

Capitalism and a free market has been what separated us from the rest of the planet. It assured the most wealth for the most people. It offered a ladder up for people born into poverty if they were willing to climb. Today we have a US Administration that is gleefully tearing that down to replace it with an odious witch’s brew of utopian socialism.