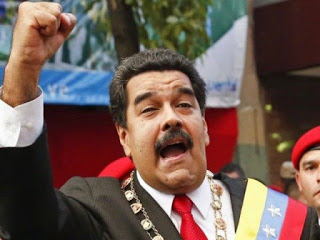 Facebook
Twitter
Pinterest
WhatsApp
Taking a page from the North Korean playbook:
On 26 September, Venezuelan President Maduro called on his military leaders to prepare for war against the US.

Wearing a military tunic and hat while reviewing an exercise, he said, “We have been shamelessly threatened by the most criminal empire that ever existed and we have the obligation to prepare ourselves to guarantee peace. We need to have rifles, missiles and well-oiled tanks at the ready….to defend every inch of the territory if needs be.”

Maduro turns nearly every outside criticism into a threat of a US attack. In that respect, he seems to mimic North Korean practice. That threat narrative reinforces the crackdown on the opposition and his continued mismanagement of Venezuela.
sub rosa: During the past year, multiple news services reported that Maduro is looking for a way out of Venezuela, literally. Secret negotiations supposedly involve Vatican diplomats. He wants asylum in a country, such as Cuba, where he can keep his wealth and have guarantees against extradition to Venezuela and prosecution. Thus far, no agreement has been reached.