Facebook
Twitter
Pinterest
WhatsApp
This is posted by way of an update since things are changing all of the time. The North Korean actions have had ripple effects in Taiwan, South Korea and Japan.
South Korea
On 28 September in his speech in honor of Armed Forces Day, President Moon Jae-in called for stronger military capabilities to deter North Korean provocations.

He said his government was accelerating three military programs. A program called Kill Chain targets North Korean missile sites for pre-emptive attacks. The second program is an improved air and missile defense system. The third is a program to decapitate North Korea’s military and political leadership.
His most important topic was wartime operational control of South Korean forces. He said South Korea should become strong enough to retake this responsibility from the US. South Korea transferred it to the US in 1950. It was supposed to have been returned in 2012m but was delayed to 2015 and again delayed to the mid-2020s.
President Moon’s call for stronger military capabilities represents a substantive change in policy, prompted by North Korean behavior. Moon replaced a strongly pro-military conservative President, Mrs. Park. He campaigned for improved relations with North Korea and less confrontation. North Korea rejected all of his overtures. It missile launches, nuclear detonation and threats persuaded Moon to modify his positions.
His government remains open to talks with North Korea. However, as a result of the increased tension with North Korea, President Moon has approved more defense spending than former President Park.

In focusing its energy against the US, North Korea’s leaders

made a strategic blunder in ignoring the effect of their decisions on South Korea.

South Korea has accelerated the long-standing South Korean preparations to command their own forces in a war with North Korea. Every increase in South Korea military power further reduces the prospect that North Korea could reunify Korea by force.
This self-reliant direction of South Korean military development has been emerging and evolving since at least the late 1980s. Some dimensions of it have not been shared with the US. No state with more than a half million capable military service personnel would surrender command and control to a foreign power in wartime, except as a last resort or as a figurehead leadership.
The North Korean actions could accelerate changes in command and control and other military improvements in South Korea by up to 10 years. The South Korean armed forces embody one of the greatest successes of US defense policy in Asia since the end of the Korean War. They know it. If war occurs, South Korean generals will command South Korean army forces.
North Korea

The Mouse-that-Roared may feel compelled to strike South Korea before their military is completely modernized, though it’s very modern and effective today. Increased spending and the possibility that the South can develop a nuclear weapons capacity of their own might keep the only fat man in North Korea awake at night.
The Chinese Ministry of Commerce formally notified Chinese-North Korean and North Korean businesses in China of the Beijing government’s intention to close them. The new order stipulates that foreign joint ventures with North Korea have 120 days in which to close. This is the latest Chinese action to enforce the UN Security Council Resolutions that impose sanctions on North Korea.
The government in Kuala Lumpur (Malaysia) announced on 28 September that its citizens were barred from traveling to North Korea.
South Korean national security advisor Chung Eui-yong told President Moon on the 28th that he expected more North Korean provocations in October. One flashpoint is the founding of the North Korean communist party – the Korean Workers’ Party. Party Foundation Day is 10 October.
Chung also said he expected North Korea to stage some kind of demonstration on or after 18 October to embarrass the Chinese leaders during the 19th National Congress of the Chinese Communist Party. 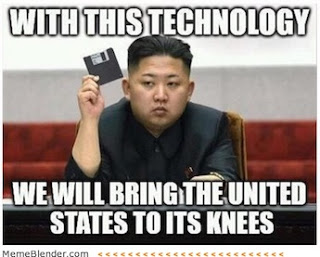 Each provocation raises the risk that it will go horribly wrong and will ignite a war. Missile guidance problems could drop a North Korean ICBM in China, Russia, Japan or South Korea. Any one of those could ignite a war. Deliberate launches against the US in Guam will result in North Korea being flattened. In past decades, the Norks could always rely on China backing their play. That is no longer the case. China doesn’t want 20 million North Korean refugees fleeing into their country but they are preparing for that potential eventuality.
China is no longer the rogue nation that it once was. They have a plan to show the world “how cool they are” and the North Koreans are fouling that up. It’s a bad decision on Kim’s part, but he’s a man known for making unsound decisions.