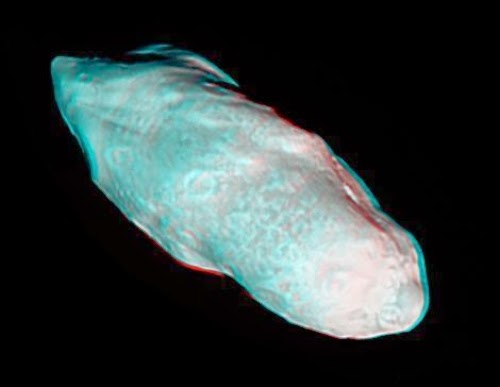 Facebook
Twitter
Pinterest
WhatsApp
I’m being anthropomorphic – but Saturn’s moon, Promethius, does look a bit like one of those derelict spacecraft that you always find in SciFi books. In this case (taking authorship and fiction to a whole new level) Promethius may very well be a survey ship, launched from the planet Zoon in a faraway, distant galaxy zillions of years ago that became trapped in Saturn’s orbit and has been iced over.

Prometheus is one of Saturn’s innermost moons. It orbits the gas-giant at a distance of about 140,000 kilometers (86,000 miles) and is 86 kilometers (53 miles) across at its widest point. The porous, icy world was originally discovered in images taken by NASA’s Voyager 1 spacecraft back in 1980.

When mankind lands on the object, they must do so while employing evolved shielding because the derelict ship is subjected to blasting radiation from Saturn.  Maybe it is a breach in that very shielding that caused the original crew to perish on the flight back from Earth to wherever they came from? I fully expect that when we get there, we will find the ship loaded with dinosaurs, which were believed to be Earth’s only intelligent inhabitants back when the ship departed. The aliens experimented on the dinosaurs, finding that they, the dinosaurs, were going extinct due to dino-induced climate change. If only the dinosaurs had developed the internal combustion engine, there would have been no ice age!

Can we get the ship’s engines started? Can we de-ice the damned thing and get it looking ship shape instead of an icy torpedo? And what will we do with the dinosaurs that are in suspended animation? I’m thinking Jurasic Park…

Cassini’s narrow-angle camera captured two black-and-white images of the moon on Dec. 26, 2009, and the imaging team combined the images to make this new stereo view. It looks different from the “egg-cellent” raw image of Prometheus obtained on Jan. 27, 2014 because that view shows one of the short ends of the oddly shaped moon. In this 3-D image, the sun illuminates Prometheus at a different angle, making the moon’s elongated body visible.

So it goes.
For more information about the Cassini Equinox Mission visit: http://www.nasa.gov/cassini and http://saturn.jpl.nasa.gov. Ashima Research contributes to the Cassini mission in the area of atmospheric analysis of Saturn’s moon, Titan.