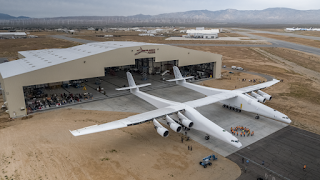 Sure, it may sound weird when you first hear about an aircraft launching a rocket into space, but the concept has been around for a long time.  F-15’s have successfully shot down satellites in test situations by launching ASAT missiles.
Stratolauncher is the largest aircraft in the world and so far, all its done is taxi down a runway in the Mojave Desert where such things are tested.
The booster is slung between the two fuselages and the aircraft takes it into the stratosphere and kicks it loose. Presumably it reaches orbit from there, and the aircraft returns to Earth – fully reusable.
Barack Obama made one of NASA’s key missions making Muslims feel good about themselves and as with many things that happened during the years of Obamanation, it flopped. ISIS was not impressed.
At the same time, entrepreneurs in the US have taken up the gauntlet and seem to be making launches profitable for them and less expensive than the old government programs were. No surprise there.
Our friend and fellow blogger, DRJIM worked for a different commercial space venture for a while. He can explain his feelings on the matter if he’s inclined
I have no idea whether or not this will work. I don’t know if the aircraft will ever fly. However, I can’t help but think that efforts like this one (whether or not this works) will be our eventual way back into space – the Space Force notwithstanding. Government is unreliable. You get the wrong person in office and rather than aiming high, tax money is diverted to buy votes. 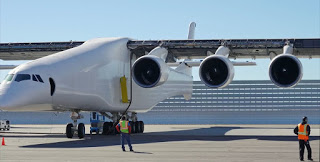 Paul Allen (born January 21, 1953) co-founded Microsoft alongside Bill Gates. In August 2018, he was estimated to be the 46th-richest person in the world, with an estimated net worth of $20.2 billion. He spends a lot of his money on projects like this one. If I had that kind of scratch, I might do the same. I mean, why not?