A View of Asia 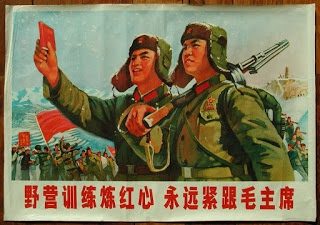 The Chinese government has prospered in its relationship with the (feckless) west, and in particular, the US. To the Chinese leadership, the US is the “mysterious East”. As a professor and visiting lecturer at the People’s Public Security University in Beijing, I had some spirited discussions with hard core Chinese ideologues. Heads exploded when I attempted to explain the application of the Second Amendment and why it was critical that private American citizens be armed as to their preference. We agreed to disagree, but those concepts don’t square well in the ordered Chinese mind. As Kipling so wisely put it, “East is east and West is west and never the twain shall meet.” They (and the Russians) view the center of the United States as a vast irregular militia, armed to the teeth, and well outside of control of Washington. I agreed with them. It’s the way that the Founding Fathers wanted it. An armed society is a free society. Slaves are never armed. The Second Amendment is not about deer hunting.

Chinese media reported that on 3 December China lodged solemn representations with the United States, urging it to honor its commitment to the one-China policy, Foreign Ministry spokesperson Geng Shuang said on Saturday.

“It must be stated that, there is only one China and Taiwan is an inalienable part of China’s territory, and the government of the People’s Republic of China is the sole legitimate government that represents China. Those are all facts recognized by the international community,” Geng said.

He also said that the one-China principle is the political foundation for China-U.S. relations. “We urge relevant US (sic) side to honor the commitment to the one-China policy as well as the three Sino-US joint communiques, and cautiously and properly handle Taiwan-related issues to avoid any unnecessary disturbance to the bigger picture of Sino-US relations.”

In public, the Chinese are playing down the significance of the telephone call, but that almost certainly is a façade. The leadership will interpret this as a crisis in US relations that threatens the stability that President Xi and his supporters have made the cornerstone of Chinese engagement world-wide. And this is why President Trump did what he did. He began negotiations with the People’s Republic of China. The mainstream media melted down as did the Obama State Department, but it’s clear to anyone with eyes that the situation has changed.
An Fengshan, spokesperson for the office, said the Chinese mainland’s adherence to the one-China principle and the position against Taiwan’s independence are steadfast.

“We are determined, confident and capable of containing Taiwan independence in any form and pushing forward the national reunification process,” said An.

The Chinese have been clear for over a decade that they will use force to prevent Taiwan from declaring independence. The phone conversation means that China must not neglect the military capabilities that will ensure that its threat is not idle.
This is the second recent important national security issue on which the Chinese judge the US has shown it cannot be relied on. The Chinese judge the US behaved the same way regarding its reaction to North Korea’s nuclear test on 9 September.
In the Chinese view, just when China began cooperating with the US and South Korea on imposing sanctions on North Korea, the US and South Korea announced the agreement to install the Terminal High Altitude Area Defense (THAAD) anti-missile system in South Korea.

I have no idea how the Trump Administration will address the Chinese militarization and seizure of the South China Sea as it’s own swimming pool. However I’m sure that will be on the table as well from a US perspective as the negotiations move forward.

Since President Trump has not formally taken office, there have been no discussions between his still-forming administration and US Allies in the region – principally Australia. The Philippines is still in play and could tilt in any direction.

For China, the Taiwan phone call manifests the same behavioral pattern. Chinese leaders see US policy positions as impermanent and that they cannot be taken for granted. They are correct. The US policy has changed. Precisely how that will all play out is a book yet to be written, but we at Virtual Mirage will keep you in the loop with accurate information, and not the histrionics that one reads in the New York Times or the Washington Post – or is reported on MSNBC.

Delegations from Over 30 countries and a dozen international organizations attended the conference on 4 December in Amritsar, Punjab State, in northwestern India. Indian Finance Minister Arun Jaitley said, “The three big issues of the conference were countering terrorism to create stability in Afghanistan, providing Afghanistan the connectivity to strengthen economic activities and the development which is essential for progress.

The Amritsar Declaration. This document is the final conference report. It recognized terrorism as the greatest threat to peace and security.

“We remain concerned by the gravity of the security situation in Afghanistan in particular and the region and the high level of violence caused by the Taliban, terrorist groups including ISIL / DAISH and its affiliates, the Haqqani Network, Al Qaida, Islamic Movement of Uzbekistan, East Turkistan Islamic Movement, Lashkar-e-Taiba, Jaish-e-Mohammad, TTP, Jamaat-ul-Ahrar, Jundullah and other foreign terrorist fighters. Acknowledging the support that terrorism derives in our region, we demand an immediate end to all forms of terrorism, as well as all support to it, including financing of terrorism. We recognize that terrorism is the biggest threat to peace, stability and cooperation in our region….”

“We strongly call for concerted regional and international cooperation to ensure elimination of terrorism, in all its forms and manifestations, including dismantling of terrorist sanctuaries and safe havens in the Heart of Asia region, as well as disrupting all financial, tactical and logistical support for terrorism. In this regard, we call upon all states to take action against these terrorist entities in accordance with their respective national counter terrorism policies, their international obligations and the UN Global Counter Terrorism Strategy 2006. Furthermore, we encourage early finalization of the Comprehensive Convention on International Terrorism with consensus….”

“We reaffirm our recognition made in Islamabad last year that violent extremism facilitates, encourages and justifies acts of terrorism and violence and we undertake to introduce measures to curb the spread of violent extremism and terrorism. We recognize the necessity of taking serious measures to address recruitment of youth to extremist and terrorist networks. We realize that the radicalization of disaffected elements of the population, especially youth, can only be prevented by effective de-radicalization and counter-radicalization strategies involving all the HoA countries….”

About half of the terror groups identified by name are based in Pakistan. The East Turkistan Islamic Movement is a Uighur separatist movement in Xinjiang, China.
The excerpts above reflect a systemic approach to countering terrorism, from recruitment of youth, to financing of terrorism to logistics. The approach is sound in concept.
Afghan President Ashraf Ghani set the tone for the conference. He accused Pakistan of launching an “undeclared war” on Afghanistan by covertly supporting several terror networks including the Taliban.  It’s not a secret. Or if it is a secret, it’s not a well-crafted secret.
Ghani quoted a top Taliban commander saying unless terror sanctuaries were allowed in Pakistan, the outfit will not last even a month.
The Amritsar Declaration praised Iran and China for helping Afghanistan overcome the condition of being a land-locked country by investing in infrastructure projects.