A “Police State” in America 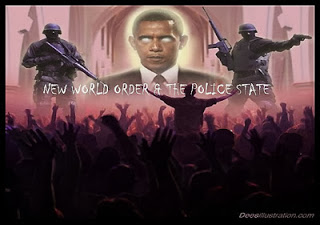 I doubt that you’d see one anytime soon despite what the president and the liberal elite might like to see.
With the exception of some of the police union clods and executive management types who hope to curry favor for their move into politics, most police officers are very conservative. Most don’t care much Barack Obama or his regime — and if it came down to it, you’d see the same thing that happened in Colorado when they moved to ban firearms, spread across the nation. The police and sheriffs came out against the move.

You see, police officers take an oath to defend the Constitution against all enemies foreign and domestic and to bear true faith. That includes the Second Amendment. Yes, so did members of the Obama Administration but does anyone think that they took their oath seriously? Despite what you my think, most police officers do.

Barack Obama swung into office promising a legion of “special police” (brown shirts) more numerous than the US Military that would help to usher in his vision of hype and change. Where is the hoard of inner city storm troopers? Five years later, there is no whisper of millions of Obama minions taking to the streets to seize firearms and kill dissidents.
With this proclamation to the American people, Barack Obama became the best firearms salesman that the world has ever known. The shelves were bought out, and for the past five years, ammunition and many firearms are as rare as hen’s teeth. With production capacity going around the clock for 1,700 days we’re starting to see ammo show up again. Nobody has been able to arm the American people the way that Barack Obama has. People bought the means to defend themselves to the extent possible from the armed ACORN volunteers in government livery.
Most of the inner city people who would volunteer to take on Wyoming or Utah would need to be planted and replaced within the first few hours of arrival. And if there is one thing that inner city people is, it’s lazy. Getting paid to put on an SEIU t-shirt, grab a box lunch and get bussed somewhere so that you can protest by holding a factory-made sign is one thing. Taking a shot to the head from 1,000 meters is quite another. (read the history of the Boer War)
Not only would the Obama Legion have had to face inevitably uncooperative sheriff’s and police forces, America has been constantly at war since 9/11/01 and returning combat veterans are fully trained. I don’t know one who would stand by idly and allow brownshirts to slaughter the innocent. Many of those combat veterans were/are also trainers who know how to train people to fight.
So while I’m sure that the Democratic Party and the radical utopian socialists in their ranks would love to see an effective federal “brown shirt” force come together, with the exception of inner city people, not many would join. Fewer still would survive.

Before the coming of Obama, Americans were armed. Today, five years into the regime, Americans are well armed.