A Litmus Test for War 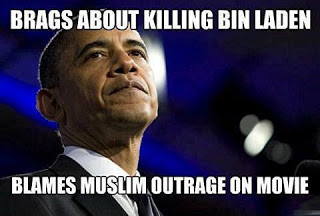 There are people who read this blog who will presume that I am a war hawk and that’s not true.

That being said, in this multi-polar world following the collapse of the old Soviet Union, and the rise of international terrorism, it’s important to show that we hold people accountable for their attacks on both AMERICAN people and American interests.

The Obama Administration, working on a concept of multicultural correctness wants to flatter and cajole our enemies. It didn’t work in Benghazi on 9.11.12. And if he made another apology tour like the one he made in 2009, they’d laugh at him again in the same way they did then.
Post 9.11.01, we invaded Afghanistan to remove terrorist centers for training, logistics and refuge. Today, things have devolved to the point where U. S. and British soldiers are urged not to shoot Taliban Jihadists at night so that the locals can sleep without interruption.

That is the term that we’re using now.

This news comes out on the heels of an investigation into the death of Royal Marine Sergeant Peter Rayner, whom witnesses say watched the Taliban plant IEDs at night but was ordered not to engage them. Families of other soldiers and Royal Marines are telling stories of how their loved ones were not allowed to use mortars or night illumination when they came across Taliban members in an area full of IEDs.

The reason given was that “the sound of shooting ‘might wake up and upset the locals.’”(Daily Mail – UK)

General William T. Sherman, former professor at the Virginia Military Institute became legendary during the War of Northern Aggression/Civil War for calling it the way he saw it. “War means fighting and fighting means killing.”

There is no way to dance around the fact that Jihadists from many nations, mostly in the Middle East have declared war on the United States and its citizens. We must meet them where they are (wherever they are) and we must kill them with extreme prejudice, or they will do the same to us. They hit us with asymetric conduct in low intensity conflicts and we should return the favor.
In order to accomplish our mission we need to resume enhanced interrogations and insure that brave people who work in the somewhat ambiguous and nasty world of Intelligence are not persecuted by a future liberal regime the way that they were post 9/11. We need to follow the jihadists to their lairs and we need to destroy them. “All war is hell.” – General Sherman (again)
President Obama wrung his hands over the demise of Usama bin Laden but in the end he did the right thing. That campaign against those people needs to be RENEWED with extreme vigor. President George W. Bush coined the term, “War on Terror”. President Barack Hussein Obama renamed it a “foreign contingency operation”. We need to restore the War on Terror. The attack on the US Consulate in Benghazi should have been a wake-up call to President Obama, but it was not.