A Lion in Winter 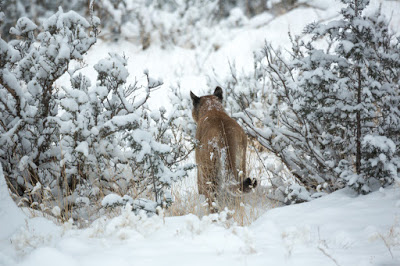 Snow muffles sound and as you move slowly through the forest, the natural camouflage of the lions deserts them. This one was after a small herd of white tail deer, which were alert and escaped – but only just.
There are a lot of mountain lions in the area. You can hear them at night as they fight for mating rights and for territory. The local deer survive, which is a testament to their skill at eluding their predators. 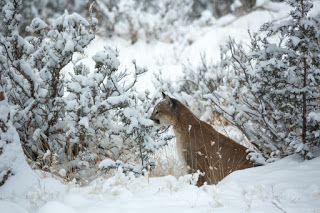 An old mule deer doe, that I named Judy, has seen a few winters come and go. I see Judy almost every day. She stays in a relatively small territory. There are also white tail deer, smaller, less able to defend, but very nimble here on the property. It’s the white tails that the mountain lion was after today.
You have to get up very early in the morning if you plan to have a white tail deer for breakfast and this cat must have slept in its den far too long. This is almost mid-day. 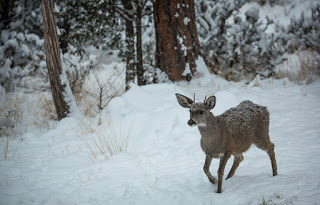 The deer are in their rough, gray winter coats that stave off the effects of the cold. In most areas, deer and elk migrate with the onset of winter, but the herds here, in this place, are remarkably stable.
I haven’t been out of the house but maybe one time when I didn’t see some sort of animal life. The elk herds between the hovel, where I now live, and Blue Ridge Reservoir, about six miles distant, are thick even though a fire swept through a lot of the area last summer. 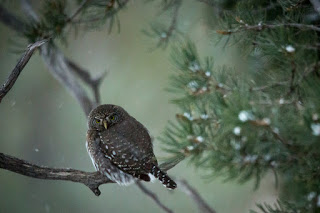 The pygmy owl (left) asked me ‘who’ the heck I was to wander through its forest.
I introduced myself and it seemed to be satisfied.
There will be more post cards from Arizona’s Mogollon Rim as the days move forward and the season’s change, for your amusement.
You don’t see many people up here. People have told me, “LL, you’re insane.” I assured them that there is plenty of company.