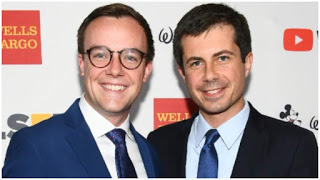 Facebook
Twitter
Pinterest
WhatsApp
Mahatma Ghandi laid out seven points – seven blunders, as he called them, that led to (avoidable) suffering. They are worth repeating here:

1. Wealth without work/labor.
2. Pleasure without conscience.
3. Knowledge without character.
4. Commerce without morality.
5. Science without humanity.
6. Worship without sacrifice.
7. Politics without principle.

Pete Buttigieg (pronounced boot-jeg-jeg), candidate for the presidency, has taken started quoting the Bible (random quotes, that leads me to suspect that he never actually read the book) to make campaign statements. I thought to myself, ‘that’s rich, a self-proclaimed sodomite quoting from the Bible in an effort to shame Christians, most of whom wouldn’t vote for him if he was the only candidate on the ballot.
I don’t know which one of the happy couple (left) identifies as female, but then again, maybe neither? He’s out there running around with Beto (Irish Bob) O’Rorque, who is also running for President. They’re neck-in-neck last I heard, but I don’t follow this foolishness that closely.
The Butt Guy favors a $15/hr minimum wage. We saw that work on the Sanders campaign. Bernie was shamed into paying his people more, so he cut their hours. And that, my friends, is how that story ends. Butt Guy says that God wants a $15 minimum wage and quotes some obscure passage in the Bible to demonstrate the All Mighty’s intent.
Butt Guy could stand some education in the teachings of Ghandi. He comes from a wealthy family, silver spoon in his mouth (or somewhere) and I’m not saying that he’s stupid. He isn’t. But wealth without labor and pleasure without conscience, politics without principle, etc. applies to this mountebank.