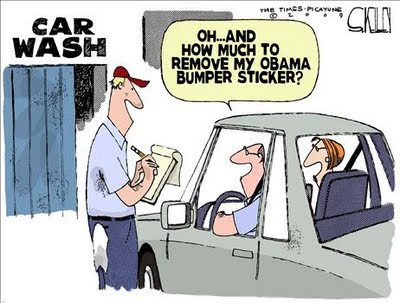 It isn’t a wind of change, but perhaps a breeze. And it doesn’t from that fetid band of political hacks that brought us such notable legislation as the Stimulus Package, the Healthcare Bills, Cap and Trade and the GIVE Act.

“What is that which the breeze, o’er the towering steep,
As it fitfully blows, half conceals, half discloses?
Now it catches the gleam of the morning’s first beam,
In full glory reflected now shines in the stream:
‘Tis the star-spangled banner! Oh long may it wave
O’er the land of the free and the home of the brave!”

The breeze of change flows through the town hall meetings, wafts around tea parties, and it’s ignoring political parties. The leaders who emerge are not paid, their ideology is the concept of a Constitutional government based on restraint of Federal government, moderation on spending, and representation of the interests of all Americans.
Apathy gripped us, we never thought it could happen here, and we woke up and found an ObamaNation on our doorstep espousing doctrines of socialist re-distribution of wealth based on the model set forth by a utopian power elite. America didn’t elect Barack Hussein Obama with the intention of allowing him to install nearly two dozen czars – unelected, unconfirmed by the legislature, not vetted by the FBI. But when we woke up, there they were.
America woke up to suspiciously secretive regime composed of of Black Panthers, Black Liberation Theologists, doctors preaching eugenics and self-proclaimed Marxist revolutionaries advising the President and helping him to direct the affairs of State.
America currently watches as the Administration dismantles the Central Intelligence Agency in the face of our enemies, while at the same time releasing terrorists from custody. The same man who bombed a Pan Am aircraft was repatriated to Libya – a hostile state.
America watched while President Barack Hussein Obama bowed to the King of Saudi Arabia and then he and the First Lady insulted the Queen of England. We have watched that president neuter our friends and promote the welfare of those who would do us harm.
And the gentle breeze is blowing harder.
Americans petitioned their elected representatives for redress and were met with the President’s hirelings: Union Thugs and hired ACORN agitators. They plead with their senators and congressmen to listen and were spurned, made objects of ridicule and their petitions were ignored and trampled.
Today it’s a breeze, Mr. Obama. Tomorrow it will be a wind, and the day after a gale-force blast.
Dear Leader (President Obama):
Consider stepping down from public office, and please take Joe (Slow Joe) Biden, Nancy Pelosi, Harry Reid and Hillary Clinton with you. Leave no czars behind, put the “stimulus money” back into the US Treasury and forget your twisted dream of the great ObamaNation.