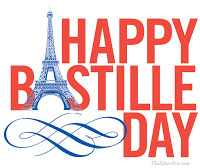 Bastille Day is a slow day here in Southern California where it’s a crime to storm things and rip them down. If you get a large enough gang of people and if they’re not white, then it’s embraced by the national government.
But I’m not an inner city guy (alas), so won’t be burning down neighborhood stores and throwing rocks at the po-lice. There is the local mosque…and I could picket it (a solid step down from storming the bastille) but I have a feeling that would be a ‘hate crime’. I’m not up to knowing what is and what is not a hate crime these days. I thought that the illegal alien who shot Kate Steinle in San Francisco would be charged with hate-crime murder, but because he’s a Mexican and she was white, it doesn’t apply. Now if he had been white and she, a Mexican, I’m sure that it would have been a hate crime.
Even the French don’t do much on Bastille Day (referred to in France as the National Holiday). There is the traditional parade in Paris. The French Foreign Legion is always the highlight. There are fireworks at night in Paris, but nowhere else.
I thought of doing something on the Ducati – with red, white and blue, in honor of Bastille Day, but most Americans (a) Don’t know that it’s Bastille Day (b) Don’t know that the French tri-color flag is red, white and blue (c) Would think that I forgot that Independence Day was ten days ago.
Having considered the futility of celebration, I am contenting myself with work in front of the computer with a possible foray on the motorcycle at the noon hour to get a deli sandwich, which I will bring back to the office and eat with potato chips (plain) and a diet soda, while I work.
The next possibly existential question is whether the work I do has any meaning. The only answer that I can come up with is that it doesn’t. Not this work. And that begs the question of why I do it instead of celebrating Bastille Day with the five other people in town (unknown to me) who know that it’s Bastille Day, by drinking wine, eating French bread, cheese, a little sausage, and shooting guns in the air. 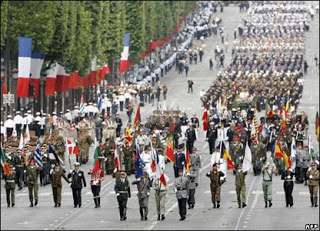 Bastille Day in France is a time for military parades. America doesn’t do that anymore and hasn’t for years. It’s not progressive of me to think that military parades are stirring and represent a thank-you to the people in uniform who work tirelessly (for less than minimum wage) in the service of the rest of us.
There is always September 11, that was changed from a day of remembrance of what Muslims did into a day when the President said that we need to honor political activists who stir things up in the inner cities (sort of like Bastille Day). Since the President himself made his bones as a political agitator in Chicago, and many say that he’s a closet Muslim, that may explain his attitude toward that American remembrance. Imagine if we had military parades on September 11…the lesson being, f*ck political activists, this is what’s coming if you screw with us again?