A Day at the Range (part two) 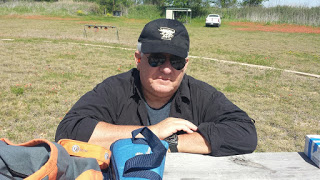 Facebook
Twitter
Pinterest
WhatsApp
A  day at the range in the green Texas spring where every possible wild flower is blooming is a wonderful thing. The sky was flawlessly blue and the temp hovered mid-70’s. It’s like Southern California every day!
The only sort of gun control recognized in the Texas hill country is that which helps you hit your target. It is with this in mind that Lone Star Parson blazes away (above) with a Colt Python. He’s firing single action, not in a combat shooting mode, but to practice rapid fire, single action. At the conclusion of this training evolution, LSP decided that he needs to gather his shekels for his own Python. I don’t know why Colt no longer makes the Python.  I have cautioned LSP that once he purchases a Colt Python with a four-inch barrel, he will want to buy one with a six-inch barrel. I speak from some experience in this regard.
A .357 Magnum is more practical than a .460 S & W Magnum handgun for several reasons. Before I outline those valid reasons, hang with me on the virtues of the .460 V (five inch barrel).
The .460 is a beast of a large bore weapon, designed to slaughter grizzly bears threatening you in the wild and forbidding north. You have three cartridge options with the .460: (1) .460 S&W (cartridge about the size of a man’s little finger), which fires at velocities more in keeping with a rifle than a pistol. It’s a grizzly killer. (2) The .454 Casull, a solid magnum cartridge, less expensive to shoot than the .460, but a less than ideal target round.  (3) .45 Colt (also referred to as the “long Colt” so as to distinguish it from the .45 Colt Automatic Pistol Cartridge or ACP). This last option is less expensive, offers less recoil and is better suited for range training than the more potent magnum loads.

(note) A longer barrel means that the bullet will be traveling faster out of the muzzle as more powder burns and it offers you a longer sighting radius. A longer barrel does mean that the weapon will be heavier and a bit more awkward to holster and carry.

The .357 Magnum, as with the .460 Magnum, allows the shooter to select less expensive .38 Special ammunition for range-day use. It is a potent cartridge and provides a lethal option for most shooters in a revolver that is roughly half the weight of the heavy .460. There are MANY revolver options at different prices that fire the .357 Magnum cartridge and you can select the one best suited to your needs. There is only one revolver that fires the .460 (but there are different barrel options).
“God made men,
Samuel Colt made them equal.”
Many younger shooters look down their noses at revolvers because of the lower capacity of the cylinders, the time involved in reloading (even with speed-loaders), etc. I understand their feelings and my primary handgun is semi-auto, but there is a joy that comes with shooting a revolver for those who love them that can’t be easily replicated. They also have a number of very potent rounds that have chamber pressures involved that can’t be managed by semi-automatic handguns. 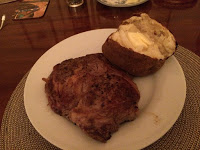 Following a range day, it’s important to eat a steak (when in Texas, do as the Texans do). I’m not sure why this is a rule, but it is and I have no rational option but to fall in line and “eat the steak”.  After all, isn’t the Ribeye the ‘king of steaks’?
Does eating beef make you fierce? Some Texans say, “yes”. One thing is for sure, Tofu in California doesn’t make you fierce.