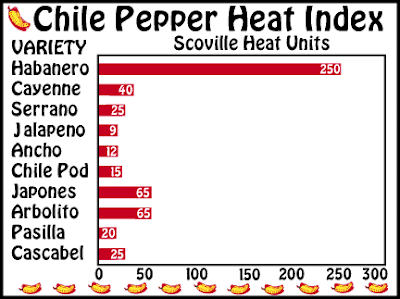 Facebook
Twitter
Pinterest
WhatsApp
This is a New Year’s Resolution:
In the weird world that I inhabit, some of my friends argue as to the relative potency of the hottest chili peppers on the planet. Some say one and some say another. There comes a point in my experience when testing hurts coming out more than it it does going in — as you are proving your manhood by eating liquid fire. I’m staying home this New Year’s Eve primarily because I have the flu – but on other occasions in past years I have been coaxed into acts of supreme foolishness as set forth below.

(Fox News) The Guinness Book of World Records has recently declared Ed Currie’s Carolina Reaper peppers as the hottest on Earth, ending a more than four-year drive to prove no one grows a more scorching chili.

resemble a heart shape. But they’re apparently mild when compared with Ed Currie’s batch of vegetable lava (cited above). “The heat of a pepper is measured in Scoville Heat Units. Zero is bland, and a regular jalapeno pepper registers around 5,000 on the Scoville scale. Currie’s world record batch of Carolina Reapers comes in at 1,569,300 Scoville Heat Units, with an individual pepper measured at 2.2 million. Pepper spray weighs in at about 2 million Scoville Units.”

Sometimes you can mask uber hot – hot chicken wings with ranch dipping sauce to get them down, but as suggested above, getting them down is only part of the battle. The stomach’s natural reaction is to ‘send them back’, which means that your throat may be blistered twice. Worse still, the stomach reneges on its responsibility to reject and eject and it sends them along though the digestive system.

I don’t know when eating hot chili became the moral equivalent of a ‘dick measuring contest’ but it apparently has and there seems to be little that I can do to change it. You have to eat the hot chili pepper without complaint and without barfing or be revealed to your friends as a ‘wimp – with a capital P’.
A Trinidad Scorpion Morouga is consumed below: 1.4 million Scoville Units (a little more than half the heat of a Carolina Reaper)
A girl (Nikki) tries to take on the manly art of stupid hot chili pepper eating. Her boyfriend, John (super wimp) giggles like a little girl in the background while filming her. Somebody needs to kick his ass.
The Naga Jolokia (Ghost Chili Pepper), which my friend Wild Bill feels is the hottest chili in the world, is a little less than 50% of the heat in Soville Units of the Carolina Reaper.

My New Year’s resolution is not to eat a Naga Jolokia Chili Pepper, a Trinidad Scorpion Morouga or a Carolina Reaper Chili Pepper in 2014. If I ate any of them, it would likely end my generally worthless life, and while that’s not all bad, I don’t want the epitaph on the headstone to read, “choked on a chili”. I deserve something more respectful than that.