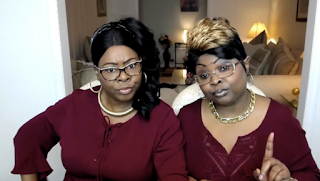 Kanye West escaped the Democratic plantation and people are losing their minds. (more here) West gave black people permission to like Donald Trump and it’s creating some difficulties among the Party of Inclusion.
West isn’t the only one. Diamond and Silk (pictured left) have also come out as voices of reason in favor of President Trump and the progressive movement is not amused. Facebook threw them off the platform as did Twitter. As I type this, they’re being allowed back onto Facebook because of the public outcry.
Lynnette Hardaway and Rochelle Richardson, popularly known as Diamond and Silk, are American live-stream video bloggers and social media personalities who became known because they called it the way it is. Black people and people of color have been used as pawns of the Democrats who control every inner-city slum in the nation and have NO INTEREST in fixing the poverty or rampant violence since they profit from it. In the case of Diamond and Silk, they’re regular guests on the Fox News Show, “Watter’s World”, Saturday night.

The Joint Comprehensive Plan of Action (JCPOA) is better known as the Iran Nuclear Deal. It’s one of those things that never would have made it through the US Senate, so Barack simply made it an executive order, which President Trump unmade yesterday.
The deal is really insane because Iran self-reports whether or not it violated the terms of the agreement. There are not provisions for complete on-site inspection. And Iran said that they are not cheating and creating weaponized nuclear material…even though they’re on record saying that they want to nuke Saudi Arabia, Israel and the US in that order with the missile delivery systems that they are building with North Korean technology.

“As we exit the Iran deal, we will be working with our allies to find a real, comprehensive and lasting solution to the Iranian nuclear threat. This will include efforts to eliminate the threat of Iran’s ballistic missile program, to stop its terrorist activities worldwide and to block its menacing activity across the Middle East,” Trump said. “In the meantime, powerful sanctions will go into full effect. If the regime continues its nuclear aspirations, it will have bigger problems than it has ever had before.”