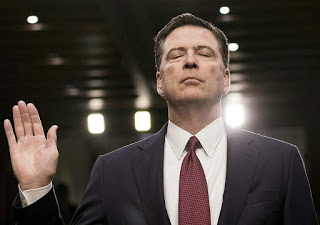 Facebook
Twitter
Pinterest
WhatsApp
An interesting rumor has been quietly circulated through the Washington DC Beltway by Democrats.
“Forgive Jim (Big Jim) Comey”
Yeah, I didn’t believe it either when I heard it the first or second time, but there is a strategy afoot to rehabilitate him among Democrats and to run him against President Trump in 2020. Unlimited self-righteousness, professional bullying, preening self-importance, and entitled arrogance are all elements of today’s FBI, and nowhere is it more apparent than in disgraced former Director Jim (Big Jim) Comey. They could round out the ticket with Sen. Kamala Harris (D-CA), who checks two boxes by being both partly African and a woman.

Jim Comey’s dedication to the deep state and to the power mongers has been proved in the octagon in the Senate and the House as they questioned him about unethical practices while in power. Will he rise to win the nomination of his Party? That remains to be seen. It would help his chances if he came out of the closet as a tranny or something, shaved his legs, wore a mini-skirt and walked like a duck. But even without that, there are some serious people who believe that he has a chance to be President.

Would he put Robert Mueller back in as FBI Director? It would be very progressive. Would FBI absorb ICE and all other federal law enforcement to be the uber agency in America. I’m sure that John Podesta is offering blood sacrifices to Moloch (his chosen deity according to insider accounts) to make it happen.