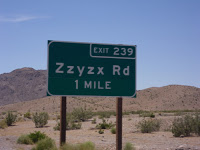 Along US Interstate 15, the road-more-often-traveled, between Barstow and Baker California, there is an off-ramp in the middle of nowhere. Exit 239 leads to the road less traveled (the Mojave Road) and to an abandoned spa, now owned by the California State University system and operated as the Desert Studies Center. 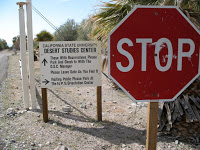 CSU doesn’t want people visiting these days, but that restriction is a new event in the history of a very old place.
The Soda Spring area has been used by humans for thousands of years. It’s also a water stop on the Mojave Road that leads from the Colorado River to Los Angeles. It’s part of the larger/longer Mormon Road. If you follow this blog, there has been a lot of mention of the historical Mojave Road (last leg of the Mormon Road or Old Spanish Trail which leads from Salt Lake City to Los Angeles), and which still exists as an unpaved dirt road. In antiquity, the Mojave Indians and other tribes used this road for trading and made their trips on foot, never having adopted the horse. 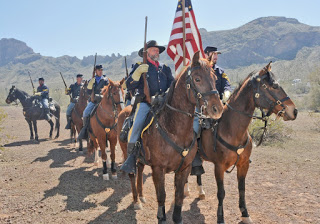 The US Army garrisoned all of the water sources (that they knew about) along the Mojave Road to control the local Indian populations. During the War of Northern Aggression, the Army built a small fort/redoubt there. At the time, it was called Bitter Spring. (See the Bitter Spring Campaign of 1860). The site was used for salt mining and the salt flats have a road across them that vehicles can traverse today. If you get off the road, even in summer, you can go to your axels in mud…I’ve seen it happen and it’s not pretty. During the winter it’s even more important to stay on the road (a metaphor for life?).
The Tonopah and Tidewater Railroad put a train station (water and whistle stop) in the area and called it Soda Springs.
Curtis Howe Springer, who claimed to be a doctor at times and a Methodist minister at other times (he was neither) gave the made-up name Zzyzx to the area. He established the Zzyzx Mineral Springs and Health Spa in 1944 at the spot, which was federal land.  Springer had a syndicated radio show for many years and used that platform to promote the location (selling government land that he didn’t own, to stupid people) as a ‘magic spot’ on the planet.   He used the springs to bottle the magic water, said to cure all manner of illness (think of Springer as a barker for a medicine show). Scamming people, he used the money to build a spa and then used the spa to bilk more money out of people. The promise of magic appeals to many people today as then. 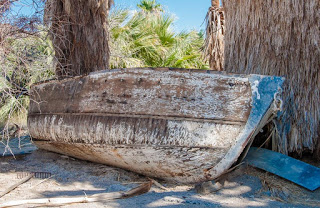 Springer had a boat that guests could use to row around Soda Springs Lake (see left). It’s odd to see a boat in the middle of the desert. Grist for art philosophy? Maybe.

In 1974, the Bureau of Land Management kicked him off the land, closed the spa and the somewhat interesting history of Zzzyx entered a new phase – the one that you see today a few miles from the I-15 off-ramp or as you drive in your 4×4 along the Mojave Road.

There is a lot of standing water in the desert. Most people don’t understand the concept of an “oasis”, which is as old as time and feel that the desert is a dead place because that’s all that they see as they race down the Interstate. The Road Less Traveled offers its own subtle surprises, and if you want to call that magic, I won’t disagree with you.