Not Necessarily “In the News” 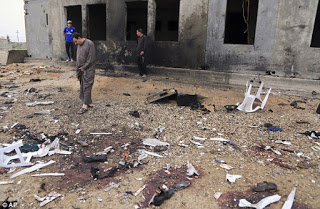 Facebook
Twitter
Pinterest
WhatsApp
If you missed all of this in the corrupt, elite, smug, nasty, lying mainstream media, I’m not surprised. However, I’m sure that they spent all of their broadcast time ripping the President and making excuses for being caught at fake news – again – and – again (CNN).

Terrorists were giving their comrade a send-off in Diyala, Iraq (near Lake Hamrin). It’s a martyrdom tradition in ISIS, called a “blood party”. Unfortunately for the well-wishers, the explosives detonated prematurely, killing them all. Aloha Snackbar, gentlemen. You’ll be getting those 72 virgins a little more quickly than you’d planned.
This sort of thing happens. A Boko Haram terrorist had the same thing happen in Nigeria – and because of a bad bomb design, he only gutted himself, and not the squad of soldiers that he wanted to dispatch. The question on everyone’s mind is whether or not that qualified him for 72 virgins. I don’t have an answer to the question but in my opinion they should do this a lot more often.

South Korean news outlets reported that the South Korean Unification Ministry approved the Eugene Bell Foundation’s application for sending materials, including medicines to treat tuberculosis and hospital construction materials, to North Korea. The aid is valued at $1.67 million.
The supplies will be transported to Nampo through China in July.
At the Chinese Foreign Ministry’s daily press session, the spokesman Lu Kang said,

“We have noted the relevant report. If the report is true, it is of course a good thing. We have said many times that North Korea and South Korea are one nation and improvement of mutual relationship and promotion of reconciliation and cooperation are in line with the two sides’ fundamental interests and are also conducive to promoting peace and development in the region. The Chinese side is willing to provide necessary support regarding this.”

“Particularly under the current situation, we hope the two Koreas can continue to release goodwill to each other and play a positive role for pushing the easing of tensions of the Korean Peninsula and for restarting dialogue and consultation.”

The approval has been confirmed by the South Korean Unification Ministry. In addition to the medicines, the project involves shipping prefabricated materials for quick construction of hospital wards. The Foundation has a contract to ship materials to build 300 wards this year. It has been working on the hospital ward construction project for three years.
This is the Moon government’s first approval of aid for North Korea. It demonstrates the extent of President Moon’s commitment to reaching out to North Korea.
The involvement of the non-governmental organization, the Eugene Bell Foundation, is a reminder that North Korea is not as beleaguered as the elaborate sanctions regime would suggest. A significant number of private aid organizations are willing to provide aid that is not subject to sanctions.
Assad’s Tour

President Assad traveled outside Damascus for the first time in months. He visited the Russian air base at Hmeimim, where Russian General Valery Gerasimov, Chief of the General Staff of the armed forces escorted him. Assad had a photo op of himself in a Russian Su-35 fighter-bomber. It was his first visit to the base.
On Sunday, the 25th, he performed end of Ramadan prayers in Hama, accompanied by his wife and children. This was his first visit to Hama since the civil war began in 2011.
These visits are the farthest he has traveled from Damascus since the Russian intervention began in September 2015. These are confidence and morale building actions. They also are statements of defiance to the rebels still seeking to overthrow him.
US/Russia and Syria
Since the US has no news media that is worthy of the name, there is no way for the mass of Americans to understand what the government is planning. USGOV isn’t in the business of telegraphing punches. However we can look at the US through the eyes of others, and read the tea leaves that way, all the while understanding that our lensing may be distorted. Russian leadership expects a US military presence to remain in Syria indefinitely.
Relations between the US and Russia in regard Syria are close to crisis mode (when viewed from a Russian perspective). In response to the warning issued to Syria by the US President, the Russian Presidency replied on 27 June,

“I am not aware of any information about a threat that chemical weapons can be used,” Kremlin spokesman Dmitry Peskov told a conference call with reporters.

“Certainly, we consider such threats to the legitimate leadership of the Syrian Arab Republic unacceptable.”

Russian Foreign Minister Lavrov accused the US-led coalition of being reluctant to bomb positions of the former Al-Nusra Front in Syria. Lavrov urged the US to drop its “double standards” for the sake of an “uncompromising” fight against terrorism.
Lavrov said there is “new evidence” that indicates that the US-led coalition continues “to take the heat off” the former Al-Qaeda offshoot in Syria.
Russian patience is being severely tested. Russian commentators are repeating an internet web posting that a Russian S-300 air defense system already has downed a US Global Hawk drone. No sources have confirmed the report, but it exemplifies the kind of action that some Russians are considering.
As in April, the rebels are the party that has strong motives for staging another chemical incident, to draw the US more heavily into the fight. It worked once, but did not alter the course of the civil war.
Commentators in the Russian Press accuse the US of seeking the permanent breakup of Syria. In the north, the Syrian Kurds would come under the protection of the US, which supposedly plans to build another US air base in Syrian Kurdistan for that purpose.
Based on the chatter from Russia, US protection would be the payment for Syrian Kurdish operations against the Islamic State far outside Syrian Kurdistan, such as against Raqqa, which is an Arab city.
In the southeast and east, the US-sponsored version of the Free Syrian Army is supposed to liberate Deir ez-Zor. This is the group that has been formed from the al-Qaida offshoot the Al Nusra Front. It also is under US protection.
The theme of the Russian analyses is that the US has switched from seeking to replace President Assad to concentrating on creating enclaves that will block any expansion of Iranian influence, access or presence in Syria.
The northern route from Baghdad to Lebanon runs through Raqqa. The southern route runs through the border crossing at Al Tanf. Control of Deir ez-Zor affords control of Syria’s oil industry and of the eastern region in general.
What is the US Planning to do?  I think that the Russians are reading things correctly. The US will crush ISIS and keep a heavy presence in the region as a hedge on Iran — at least until the next Democrat President takes office. The lack of continuity in US internal leadership is one of those things that drives other nations nearly mad.

NOTE: A section on North Korea will go live on this blog at noon (Pacific Time Zone)