Word on the Street

US Missile Strikes in Syria
There is a reason why the Russians reacted by threatening US ships and air bases when we told them that we were likely to strike Syrian chemical weapons facilities. Russian reactions to anything is to suspect a plot, if only because they are inveterate plotters and schemers.
They are peddling their S-400 (surface to air) system far and wide around the world as the only integrated, multi-level, long/intermediate/short range system that can interdict US aircraft and missiles in flight. It’s a major source of hard cash and both Turk/Iranian are taking delivery so that they too can shoot down the Americans. Having the US fire missiles at Syrians, armed with the S-300 system (a subset component of the S-400 system) and have them impact their targets invalidates the ineffectiveness of the system.

The Syrians also followed another 40 missiles into the air the following day even though there was no US launch.
The Russians tracked the US/UK/French strike packages but did not fire on them for good reason. (1) they didn’t want a war and (2) how humiliating would it have been if they’d missed? International embarrassment and innate Russian paranoia of being laughed at as manure-speckled kulaks and relegated into second-world status drives Vladimir Putin into a rage, fueled by concern because that’s how leaders in Russia are toppled. 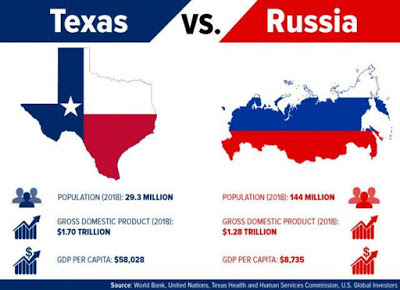 Russia isn’t even close to keeping up with the Texas GDP… and there aren’t many products that they make which can be sold for hard cash abroad. S-400 was (and may still be) a great financial hope.

Is the Waffle House Shooting an Outrage?
Our friend and fellow blogger John Coffey has been to his local Waffle House more than once. I think that there has to be something seriously wrong with somebody for them to desecrate a waffle house when there are so many delicious waffles to eat there. It’s a place of happiness and love. What’s more love than a piece of buttery waffle smothered in syrup on your fork and a slab of delicious bacon to chase it?
Clearly, condolences go to the dead and to their families.