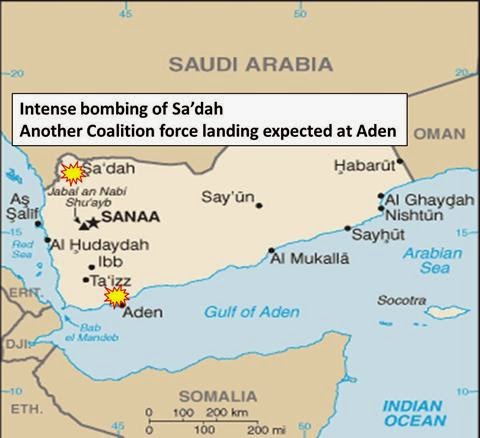 Facebook
Twitter
Pinterest
WhatsApp
Context and Precedence: On this blog, we’ve discussed the strategic importance of the Bab el Mandeb waterway (chokepoint) to Saudi Arabia — which is why Iran wants to take over Yemen. Yes, the Iranians are using Houthi proxies to do the work, but it doesn’t fool anyone anywhere.

Yesterday, the Saudi government also announced the closure of Saudi schools in the border region (north of Yemen). This ostensibly was in response to mortar attacks from Houthi forces in northern Yemen. What does this really mean?

Warnings and Indications: The closure of schools is a high-cost war preparation. It is high cost because of the burden it imposes on families in the war zone to protect children. Usually, it is accompanied by the evacuation of hospitals and nursing homes, when it signifies war preparations. Other associated activities include measures to protect museum assets and civil defense preparations.
The PUBLIC justification for school closures and civil defense activities almost always is to keep vulnerable populations safe. The ACTUAL justification often is to get those slow moving populations out of the way of military preparations for an escalation of ground fighting.

In this scenario, Saudi Arabian National Guards would be the forces to lead an attack to seize the Houthi capital of Sa’dah. They might also want to create a buffer zone south of the Saudi border to stop Houthi mortar fire across the border.
Distortions to civil normality are high value indicators of strategic intent. That is because the costs of civilian precautions are vastly higher than the opportunity costs of military deployments and increased readiness. Closing schools, in other words, imposes a greater penalty on the local government and society than do troop deployments.
Civil distortions always are significant. The intensified bombing of Sa’dah and the closure of schools on the Saudi side of the border suggest that a ground attack from Saudi Arabia is likely and will occur soon. Since Pakistan has refused to send troops to fight in Yemen, there is no timetable hold up while the Pakistanis embark.
You should also look for a potential amphibious operation to reinforce the Port of Aden. The Saudi Arabian National Guard is not skilled at amphibious resupply, but they can buy help from people who are. Aden is hanging on by its fingernails and control of the airport (currently used for resupply) is contested by the Iranian-backed Houthis.

Long Term Strategy: The new monarch, Saudi Arabian King Salman, and his family, have embedded themselves in all of the departments of government that matter and they removed the family of the late king, Abdullah.

Salman is less tied to American strategic interests and will follow his own course, while buying the latest and greatest military equipment from the USA. Once the Saudis seize the east coast of the Bab el Mandeb and the port of Aden, they are unlikely to ever let it go. The capital city of Sanaa is a less important strategic domino, but that will fall to the the House of Saud as well.

Anticipate a puppet government being put into place in Sanaa eventually as they consolidate their gains against the Iranians. Iran will keep a low intensity civil war going on in Yemen until the Saudis kill them all. That will eventually happen far from the prying eyes of Westerners, who are squeamish when it comes to these matters of statecraft and genocide.