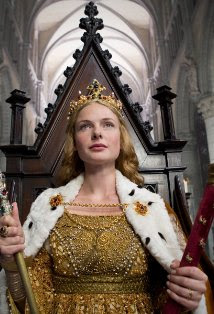 Facebook
Twitter
Pinterest
WhatsApp
The Tudors and the House of Lancaster are at war with the House of York. We are nine years into the War of the Roses, a bloody civil war (circa 1460) and Edward IV is on the English throne. His head is turned by a beautiful blonde commoner named Elizabeth Woodville, and thoughts of the civil war recede as he gives way to love.
When you consider that Elizabeth Woodville (House of York) and her family were trying to defeat Edward — and her husband died in combat against the king, the plot thickens.
Edward tries to rape Elizabeth and her resolve not to be raped impresses him to the extent that he decides to take her as his wife and queen. This doesn’t go down well with Lord Warwick, Edward’s cousin and Kingmaker (James Frain), who’s been planning a wedding to a French princess in order to prevent a war.
Thus begins The White Queen, a 10 part adaptation of Philippa Gregory’s novel series, “The Cousin’s War”.

The new series from BBC is now playing on the Starz Cable Channel. I happened onto the first two episodes on Saturday night (9 pm). While I don’t like it as much as I liked The Tudors, it’s a good series, and Rebecca Fergusson steals every scene that she is in.