Where is the Thrill? 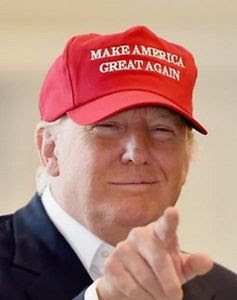 I haven’t had much time to watch the unfolding news on television but from what I can gather, the “Never Trump Republicans” are saying that the thrill is definitely gone. Maybe you like this version better? They are pulling their endorsements, and pushing for a Clinton presidency. There is nothing new with that.
Who knows but what another four miserable years of unbounded corruption and an expanded national debt to $30+ trillion might serve the Republicans well? Maybe people will turn from the free stuff and want a Republican administration so they can try to steal as much from the pot as the Dems have. Or maybe things will get so bad that we can’t pull back from the brink and it won’t matter?

There’s always stored food and ammo to try and make it through the tough times – if you thought to do that. If not, best of luck. I’m not a “prepper” but you’d have to be blind as Ray Charles and stupid as Barack not to see that things can’t keep going the way that they are, endlessly. It’s like a knuckleball. Nobody knows how it will play out, but the ball will cross the plate and the piper will demand payment.

I’ll miss the debate later today, not out of choice, but out of expediency. I have other fish to fry. I’ve heard disturbing reports from the Trump camp in which he refuses to rehearse and prepare for the debate with The Bitch of Benghazi. I realize that he’s far from an ideal candidate, but lack of preparation doesn’t bode well for him. But we’ll see.
Bill (Slick Willy) Clinton banged Monica in the Oval Office, squirted on her blue dress, then lied about it to Congress —- came one vote short of being impeached and was still re-elected. NOW Tell me about Trump liking sex with women. The news media is beating the drum and maybe it will cost Trump the election – or not. Hillary’s outrage might backfire in a debate? 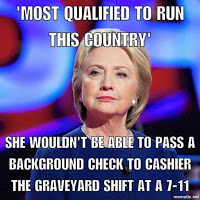 Let’s consider Hillary Clinton for a moment. There is no circumstance where (absent election to president) that Hillary Clinton would receive any security clearance based on a background investigation. Yet they want to give her access to everything (possibly including the aliens at Area 51). Gross negligence in handling classified material lands most people in prison… The uranium deal with Russia would also mean no clearance.
To be fair, the same would be true of Barack Obama, son of communists, grandson of communists, affiliated with “Uncle Frank” who ran CPUSA in Hawaii (who may or may not be his biological father), devoted follower of Jeremiah Wright, background of cocaine use and sales (it would be fun to put Barack on a polygraph with a ‘broad spectrum mandate’, wouldn’t it?) He wouldn’t ever get a security clearance either. But he can be president.

Riddle me that, friends.

And then look at this timeline:

July 4, 2016: Hillary indicates that, as President, she would likely keep Lynch as attorney general.

Who would suspect corruption?
Where is the thrill?
I think that it’s gone.