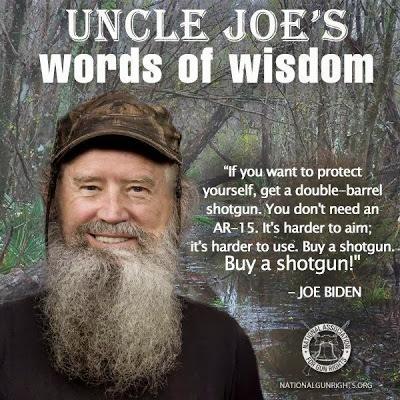 You all know that I would have voted for Joe Biden if he’d run for the presidency — because he’s pro-shotgun. Today there is a lot of speculation that his political ship has sailed as his fellow democrats don’t want him to be part of the ongoing budget crisis debate.

(Politico) When President Barack Obama laid out his strategy for the current debt-limit fight in a private meeting with Senate Majority Leader Harry Reid this past summer, Reid stipulated one condition: No Joe Biden. And while Biden attended the White House dog-and-pony show meeting last week with congressional leaders, Reid has effectively barred him from the backrooms, according to sources familiar with the situation.

I can’t see why the Democratic caucus in the Senate (really Old Joe’s club) would exclude him. Maybe they’re upset that he grabbed the limelight through the past four “summers of recovery” without giving the US Senate credit for all the great work that he did? Or maybe it’s racial – they hate him because he’s white? Or perhaps it’s because in his dotage, he’s just a sideshow clown that would distract everyone from the matters at hand?
Let’s face it, Joe has been a heartbeat away from being leader of the Free World for five years now. He’ll continue in that role unless Barack croaks mid-term, in which case he will step into Barack’s size 13 wingtips (permanently propped up on the desk) and will rule and reign over all of us. I don’t know about the rest of you, but the threat of that happening may be why Obama keeps him around.
As it is, Joe may simply have to lick his wounds and prepare for his post-political career on the popular television series, Duck Dynasty, where he will give out folksy advice in support of the shotgun lobby.