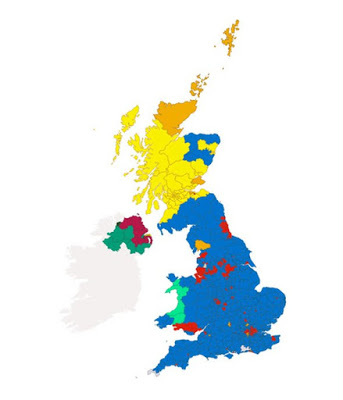 Facebook
Twitter
Pinterest
WhatsApp
BREXIT
The election marked a sharp realignment of the country’s election map along lines shaped by Brexit. Boris Johnson ran on a platform to “get Brexit done,” a promise that seemed to win over areas that had voted to leave the European Union in the 2016 referendum.
The voting map, left, reminds me of the 2016 voting map where President Trump crushed Hillary.  News pundits are suggesting that PM Boris Johnson might be a tool of Vladimir Putin because his first name is “Boris”, which just happens to be the first name of a cartoon spy character from the Rocky and Bullwinkle series in the 1960’s. Coincidence, you decide. It would have been enough for the Democrats to impeach President Trump, if his name had been Boris instead of Donald.
The Scottish National Party (SNP) won big in Scotland as was expected. A buddy of mine from the old days holds a prominent position in SNP. I stayed at his house that last time I was in Glasgow. I gave him a brass CIA belt buckle to wear when he attended and led SNP rallies. He just smiled at me. But I digress.
The UK will leave the EU in January and I think that is that. Many in Old Europe are upset that the UK is likely to align itself with the United States and establish bi-lateral trade that will replace the deals that they had with Europe.
The mere notion that Johnson’s election would make Britain great again sent hoards of progressive protesters into the street.
Juice WRLD – dead
The method of his death provided a fitting epitaph. Thus the Sunday Sermonette continues. 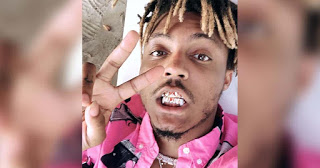 I’m sure that some of you were fans. How can Fredd not be a fan because they’re both from Illinois, home of Juice, and Barack, etc.
Jarad Higgins, known as rapper Juice WRLD, was pronounced dead at a Chicago hospital early Sunday morning.

Chicago, IL – Rapper Juice WRLD allegedly swallowed multiple Percocet pills in an apparent attempt to hide them from police during a raid of his private jet on Sunday.

The 21-year-old rapper, whose real name is Jarad Higgins, suffered a seizure a short while later and was pronounced dead at a Chicago-area hospital at 3:06 a.m.

Dozens of county sheriffs in Virginia have vowed not to enforce newly minted gun control laws that violate the US Constitution. Counties have passed resolutions defending their resident’s rights. Will Virginians establish a police state where soldiers search the homes of suspected gun owners who refuse to register their rifles with the Virginia State Police?
And what about the Virginia State Police? Have those officers sold their oath? The oaths that we all swore to defend the Constitution against ALL enemies, both foreign and domestic are not caveated.
In some locations, resolutions have passed where county sheriffs may deputize citizens to resist the State and potentially the Virginia National Guard. I think that every Virginia County should adopt that measure.
Virtual Mirage stands with those citizens of the Old Dominion who with to defend their rights to keep and bare arms without reservation. It’s a serious situation and the Virginia legislature shouldn’t put itself between the citizens and the Constitution.
The Citizens of Virginia who are members of the National Guard may have to decide whether or not the orders of those appointed over them are lawful or not.