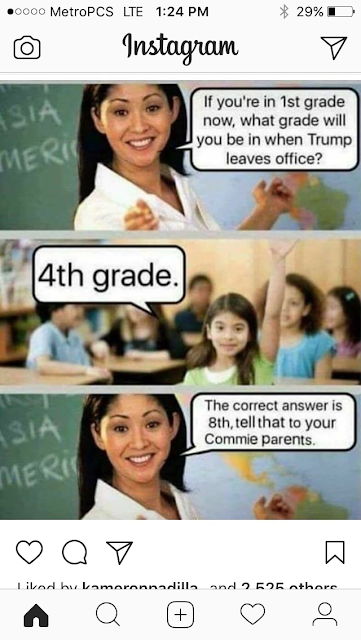 We’re headed toward the weekend and I have a few thoughts. My daughter Emilie sent me this (see right).
Pollsters running focus groups are shocked that President Trump has not lost support despite relentless attacks by the corrupt, wicked, smug, thoughtless, lying, mainstream media. I find no surprise there because they were attacking him non-stop during the campaign leading up to the election while extolling the virtue of Hillary Clinton (possibly a witch) and her philosophy, which went through seven re-sets during the campaign as her position changed based on poll results. And the public ignored them and voted for Donald J. Trump in the hope that the’d work to make America great again.
I don’t know whether or not President Trump will be a two-term president, but I would not rule it out.
If President Trump won re-election would all of the Hollywood people who threatened to leave the country leave (once and for all)? Don’t hold your breath. Clooney moved back from Italy. Maybe he should move to Afghanistan, where his in-laws are from if he wants to be politically correct? That would be very progressive of him and he could dodge mortar rounds for real like he pretends to do in his films.
Meanwhile Bernie is stumping to make all healthcare in the US the same as you find at the Veteran’s Administration (VA). Impossibly expensive and far less than perfect with ‘death panels’ scheduling procedures at a point after which you’re expected to die. Naturally, that system wouldn’t be for the elite, but the common man would be stuck with it. And once the progressive, socialist healthcare system is in place and it destroys what we now have, benefits would have to be cut back because they’re unaffordable. You don’t have to read tea leaves to see that one coming. California is $1.3 trillion in debt and a lot of that comes from healthcare benefits to the indigent and illegal aliens.
Mitt Romney has supporters who are advising Senator Orrin Hatch (R-UT) to step down so that Romney can either run for his seat in the upcoming senate election, or be appointed an interim senator so that Romney can run as an incumbent. This represents a small faction that feels that Romney can successfully run against President Trump in 2020.

I have no problem with an engineered retirement of Hatch and his replacement by Romney. That’s politics and if the voters are cool with it, who am I to argue? But the greater aspiration to defeat Trump is a wet dream that will not have a happy ending.

I was in San Diego on Wednesday and stopped at Hodad’s for a hamburger (in Ocean Beach). Hodad’s makes my favorite hamburger and is high on Old NFO’s list as well. I’m surprised that there wasn’t a line out the door, but mid-week after school started, the whole Ocean Beach/OB area seemed a bit deserted.

I realize that you all have your own favorite places to eat hamburgers (yes, I’ve been to Whataburger in TX and it’s good, just not as good). This one is mine.

Plans to fly to Mexico City on Monday for work have vaporized and need to be rescheduled, so the weekend is mine. I don’t have to spend those days in prep and can focus on grandson’s baseball and flag football games. Such is the nature of being a grandpa.
Friday (today), I will wrap the work at noon with business lunch with friends from Europe who are both partners and occasionally paying clients. Its important to knock off work early and end the week. I’ve cautioned people that the upcoming inspection trip to the White Wolf Mine ‘trumps’ anything else that they may have planned for me to participate in. There have been discussions of an out-and-back trip to Greece. I reminded those entertaining that delusion that I don’t do out-and-back to Greece for work, even flying first class. I’m getting older and if I go, I will stay somewhere in the Athens Placa for a few days — if I’m going. The Greek Orthodox Church has some really nice accommodations there for visiting guests and they’ll put me up. I’m not Greek Orthodox, but I have friends. The trip will eat up a week of time – if I go. (that’s a week that will pass quickly and the goal is to eat up time until I can move into the hovel at the mine)

I’ll find out more about the potential Greece trip at the meeting in a few hours. It may be better to send somebody else. I’ve been to Greece a lot and it’s not one of those “OH – COOL!” things for me these days. And it’s work. But I do like the food in the Old City (Placa). If there was enough time in the schedule (two weeks), and I could go to Mount Athos (Holy Mountain) and visit the monasteries for a week, I could be talked into the trip. I may need to bring that up.