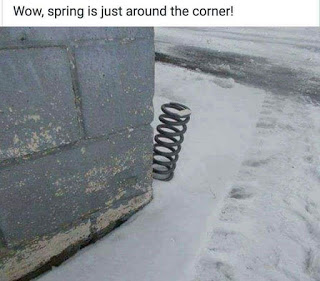 It was 58 degrees (F) at the White Wolf Mine on Sunday. There is was trace snow Sunday night that dusted the place on Monday, but all in all, it’s been a mild winter at 7,500 ft. on Arizona’s Mogollon Rim. The automatic gate that lets you into the compound froze shut because the snow melted and was promptly turned to ice, the set the gears that turn to open the steel gate. And I had to chip a little ice and use some harsh language to get it open.

Normally I wouldn’t dwell on the weather here on the blog, but there are some of you who e-mailed me and asked me why I live in the Arizona highlands.

At least some of it has to do with the weather. I thought about locations in Wyoming or Idaho but it’s a challenge to drive to warm from there in the winter.
During the summer here, it stays in the 80’s (F). So far, it’s never dropped below zero (F), but it’s still cold at night during the winter.
Right now, it feels a lot like spring at the end of January. I realize that might not remain and we could get feet of snow in February, but that hasn’t been forecast.
But it’s an hour’s drive to the nearest store/fast food, etc. and if that’s a problem for you, this location is not for you. 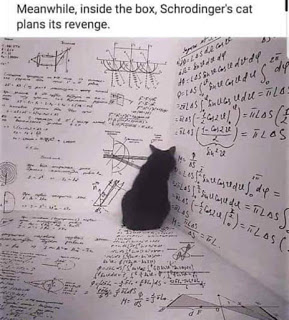 Living remotely requires that you think out of the box, unlike Schrodinger’s cat (left).

I’m on the road, working to enrich myself today. And in the process, I am missing out on the made-for-TV impeachment drama, scripted to increase viewing market share by the media, without much effort at retaining honor. I know, what honor?
Naturally, the anti-Trump, Republican hand full are sitting back and trying to leverage their personal political futures because they do hold the swing to see whether witnesses are called and this charade goes on through summer or not.
John Bolton, a craven cur under the best of circumstances, is dancing in the sidelines of the American kabuki theater, reminding everyone that HE should have been elected president because he is wiser than everyone else in the room – and in the nation.
And… I’m missing the agonizing minute-by-minute coverage in the war of tv market share. The US Senate would need a 2/3 vote to remove the president from office and that is very unlikely to happen. But grandstanding senators could prolong the drama long enough that somebody like Bernie, the Butt Guy or Bloomie – all B’s like a B movie, would march in triumph to the presidency. The ratings gods would like this to endure like a social disease because let’s face it, CNN’s ratings can’t eclipse the Sponge Bob cartoon in raw numbers of viewers. And if you turned off the tv’s at airports, it would be even worse.
The Democrat promises to raise taxes and crash the stock market all while ushering in the Green New Deal, which will save the planet because otherwise we’ll all be dead in 11 years don’t have much appeal unless you have a grievance or you think that you can squeeze a few zlotys out of somebody else’s pocket. But they do have the media, and that’s no small thing.