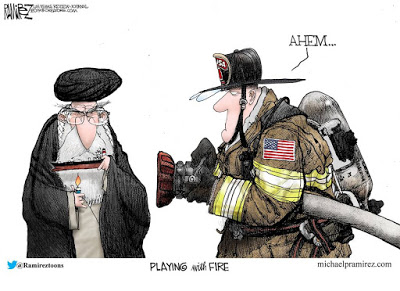 For those of you who have been asleep, Iran’s Islamic Revolution Guards Corps (IRGC) downed a US RQ-4A Global Hawk intelligence, surveillance and reconnaissance drone over the Strait of Hormuz. The commander of the IRGC Guard said Thursday that the shooting down of a US drone had sent “a clear message” to America.
With this attack, the US or its allies have experienced recent attacks on land, sea and air. The symmetry strikes us as no accident. The evidence points to Iranian instigation and instrumentality. Major General Salami of the IRGC appears to have ordered all IRGC assets to participate in the harassment.
The question that you, dear readers, should ask is ‘why’ now, and why are they picking at the US?
First of all, the timing, is set to influence the 2020 elections. The Iranian leadership watches CNN and the continual spewing of hatred toward President Trump. CNN makes common cause with Iran, which is finding President Trump much more of a challenge than the feckless, puerile Obama was. They would like to see Barack (or in the alternative, somebody like Biden, Beto, the Butt guy, or Spartacus) return to office. Somebody who would send them a few hundred billion in small bills to try and buy ‘any deal’. It’s important to Iran to stop the crippling sanctions that have led to critically high unemployment, lack of goods on the shelves, etc.

Iran judges that if they can entice the US to overreact or to not react at all, we will look either like a bully or weak and helpless in the face of the turbans.
They don’t want a war. In an alternative to the use of nuclear weapons, the USA could wipe out their nuclear processing plant with ‘Rods from God’ or some other non-radioactive solution. As satisfying as that would be, and trust me, I’d be satisfied with that sort of response, there may be another way.
The beards would be satisfied if they could ensnare the US in another Middle Eastern conflict. Not a war, but a set of limited engagements that they judge will stir Iranian patriotism and which Iran can survive. Iran must be perceived as the victim so the US electorate votes in a new administration – Maybe Mayor DeBlasio? Iran feels that they are more popular in the US than DeBlasio is. It’s tough to argue that one. 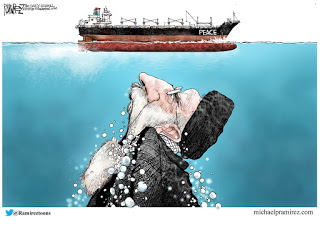 US military options are limited for deterring, much less preventing, the harassment campaign without making Iran look like a victim. Congress wants a hand in this and is pushing for a new authorization to use military force – one that they, rather than President Trump, the Commander-in-Chief, can manage. It’s not a bad political ploy. If the trolly jumps the rails, they blame President Trump. If things go well, they take the credit.
Who’s more popular in the US – Congress or Iran? It’s kind of a toss-up.
The US goal needs to be subduing Iran without fighting. The clock is ticking inside Iran when it comes to the Supreme Leader and his cadres. That’s why they are picking at the US now. Having a war to point to will tend to galvanize their dissatisfied people against the US rather than against Dear Turbaned Leader. An internal revolution in Iran works a lot better than a war (as satisfying as Rods from God would be). Turning Iran’s strategy back on itself will ultimately work better than responding to Iran’s picking in a tit-for-tat move that plays to their goals.
For example: Embargoing/blockading Iran is not as effective as convincing other nations not to buy Iranian oil. In one case, Iran claims victimhood. In the other, they are acknowledged by other nations as a pariah state, squeezing them. I realize that many who read this blog feel that it’s a good time to nuke ’em ’till they glow and use their asses for runway lights. But does that approach get us what we want, and how much will it cost in treasure, political capital, and American blood? What does The Art of the Deal suggest?