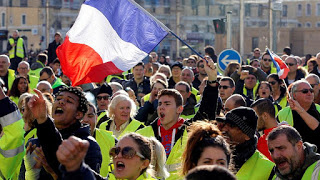 Facebook
Twitter
Pinterest
WhatsApp
The violent riots and attacks in Paris began on 17 November as a protest against the Macron government’s carbon tax. Violence was pronounced in Paris on 1 December and forced the closure of museums, galleries, high-end auction houses and shops.
The breakdown of civil order has continued for 16 days, Organizers are calling for another surge in protests on 8 December. Three people have died, and 263 people were injured nationwide, with 133 injured in the capital, including 23 members of the security forces.
The list of grievances has expanded, to cover the government program of economic reform; high taxation and social injustice in general. The yellow vests charge the government with favoring the rich and the business community that can afford to pay increased fuel taxes.
The Interior Ministry said 136,000 people protested nationwide on 1 December. Cell phone service has aided the territorial expansion. Disruptions have been reported at border crossing points with Spain. Some provincial authorities have decried the President’s lack of touch with the problems of the provinces. 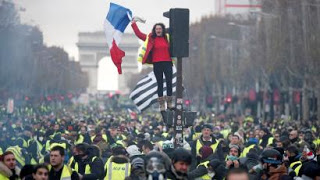 After the weekend riots, the French police have requested army assistance to restore order. About 10,000 French soldiers are assigned to guard monuments and sensitive locations around France, but they have not been ordered to intervene.
President Macron insists he will not backdown by cancelling the carbon tax. Another weekend of disorders would be a cumulatively significant drag on commercial activity and deterrent to tourism. The economic impact empowers Macron’s opposition which might force Macron to make concessions.
Powerful anti-green interests are financing the yellow vests (protesters). The vandalism and looting on Saturday, 1 December, suggest that trained provocateurs joined the protests and were responsible for inciting the violence.
The French police have expressed more solidarity with the protesters than they have with the government that employs them. If this trend continues, Macron may be forced to use the army to maintain peace and to restore order. Will the army side with the public or with its masters? Now that is the question isn’t it?