The Problem with Peace with North Korea 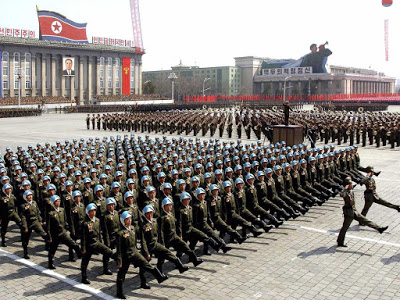 Facebook
Twitter
Pinterest
WhatsApp
Politics and Reality
Singapore’s Foreign Minister Balakrishnan will visit Pyongyang before the North Korean-US summit. Singapore’s The Straits Times reported on 6 June that Foreign Minister Dr. V. Balakrishnan will make an official visit to North Korea on 7 and 8 June. He visited the US this week and met with the US Secretary of State. It’s part of protocol as the summit between the Norks and the US draws closer.
President Trump is having fun with the corrupt, lying, elite media and the Korean experts. This meeting will be important mostly for its occurrence and secondarily for any agreement on some broad principles. Kim Jong Un described it as a beginning. The mainstream media shows little appreciation that the threat of peace is almost as great a crisis as the threat of war.
The Problem with Peace

The eight-year interlude during the Agreed Framework provided a glimpse of how difficult peace would be for North Korea. When North Korea shut down and froze the Yongbyon nuclear complex, it relocated an entire town of engineers and the people who supported them. The barracks buildings at Yongbyon housed thousands of engineers, a US source told us. They were emptied, one source said, “almost overnight.”
Peace is a challenge far beyond diplomacy. Millions of livelihoods on both sides of the Military Demarcation Line are tied to maintaining the existing conditions of no war and no peace for the past 65 years. Those conditions are so deeply rooted that change itself has become a threat and a huge challenge.
The North Korean economy is a dependent of the armed forces and the arms industry. North Korea has a mostly closed society and economy that supports and sustains a million able-bodied men in uniform from a population that the CIA World Factbook estimates is 25 million. Four percent of the population is on active duty in uniform. In the US and China, people in uniform account for less than a percent of the total population.

The military reserves and red guards represent at least 20 percent of the population. Adding in family dependents and connections, we estimate that at least a third, and probably closer to half, of all North Koreans depend on the armed forces and the arms export industry as consumers.

The economic ripple effects of supporting the army, the reserves and the red guards affect every sector of economic activity and almost every household. Without the Korean People’s Army, the North Korean economy would collapse. Without an identifiable enemy (the USA), there is scant need for 50% of a nation to be TOTALLY dependent on the military for sustenance.
Factory output would contract, even if foreign markets emerged quickly. Almost all North Korean factories are dual-use enterprises. That means that half of what they produce is directly for military use or that a civilian factory also operates a secondary military production line for direct military use.
To illustrate, a factory that makes ceramic bowls also will have installed and will operate a small arms ammunition production line. North Korea does not make ceramic bowls for export. The domestic demand for ceramic bowls is too small to keep the factory operating full time, but it can still make ammunition and keep the work force employed. Armies almost never have enough ammunition and everyone has a right to a job. 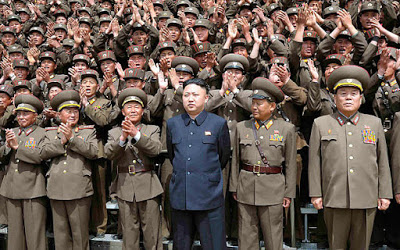 When Kim Jong Un said North Korea did not need nuclear weapons and long-range ballistic missiles if its existence was guaranteed, the same rationale could be applied to the million-man army. Kim was not talking about his army, which is important. The North Korean idea of denuclearizing the Peninsula has nothing to do with reducing forces. That issue has not come up, curiously.

Nevertheless, a peace treaty between North and South Korea would imply that a large Korean People’s Army eventually would no longer be needed and that a fundamental restructuring of the North Korean economy eventually would have to occur.
I am confident that Kim just wants the US forces to leave South Korea. He has no intention and probably no ability to try restructure or downsize North Korean forces without risking a military uprising and assassination.
In South Korea, peace would not be so disruptive because the South Korean economy is more integrated with the global economy. It is not vitally dependent on the existence of the Republic of Korea Army or on US Forces-Korea.

War is a Racket
However, sectorally, peace would profoundly threaten the defense and security industry in South Korea, with large ripple effects in the US itself. Up to a million American expatriates and defense contractors and subcontractors and their families in South Korea would be looking for work, if the US downsized or dismantled US Forces-Korea.
Dismantling a nuclear program is trivial compared to dismantling or reconfiguring a military-industrial economic system to make peace.
Kim Jong Un
Dear Leader, sion of the Kim Dynasty, lived in Switzerland from 1991 or 1992 until 2000 and attended the Liebefeld Steinhölzli School near Bern, Switzerland under an assumed name. During that time he was a lackluster student but had a fascination with America and with American basketball. From 2002-2007 he attended the Kim Il Sung military university in North Korea. He knows the difference between lifestyles in Switzerland and Europe and those in North Korea, unlike most North Koreans who live in the Hermit Kingdom. He’s also smart enough to know that the world of the Norks can not change over night. It’s an incremental process and he may have the political stroke to pull it off without being murdered by his own people.
The meeting in Singapore will likely lead to an official end to the Korean War (rather than the armistice which has been in place all these years). That’s a big step. The US and South Korea will sign off on that. Other steps will follow, and as was explained above, they can’t move THAT fast.