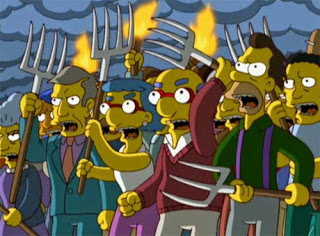 Explaining some of the current firearms control hysteria:

“No matter how educated or enlightened a person may think they are, when faced with the primal nature of a mobbing most people will betray their own principles and move to the safety of power. The people most closely associated with the target may then become the target’s fiercest attackers since there is no better way to create distance from the primal danger of a mob than to attack with vigor. Once they begin attacking their own identity as righteous then becomes intertwined with the depravity of the target.” – Quilette

We see a lot of mob mentality in the US. The target is flexible. For example: Police, where the pendulum swings between the left advocating for unquestioning love of the police (who they believe can protect them) when it suits them and rabid, venomous and vicious attacks on the police when it does not; AGE, where progs want the voting age reduced to 16 because the young are so enlightened, but the age to purchase a firearm must be raised to 21 because the young are too immature to be trusted. The mob turns its coat predictably. It’s fueled by the media (all media, not just the corrupt, elite media) for the sake of ratings that transfer into money/earnings. Without a moral center, this sort of behavior is to be expected, and our nation clearly lacks that core value.

There is good news. NRA membership applications are up 4900% since the radical left called for their destruction. That’s a big win for them.

In British North America, things changed on April 15, 1775 when the King’s Army and Royal Marines set out from Boston on the road to Concord to take firearms lawfully owned by The People. It’s said that they ‘fired the shot heard round the world’. And while the 19 mile march was tough enough outbound, the big problem for the British Army was getting back. Another mob issue. There’s a lesson here. Progs will never understand it.

Anyway, it’s Monday. Have a splendid week. Don’t join a mob unless you want to.