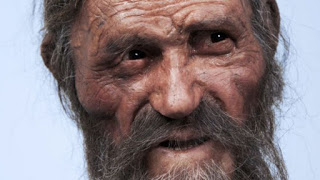 This story was written at the request of fellow blogger John Coffee and is a fictional account that is based on the discovery of Otzi, “the Ice Man” in 1991. Therefore the story is based on some facts mingled with a great deal of speculation.

The date as we presently construct our calendar and count epochs is 3328 B.C. at the foot of the Ötzal Alps where present day Austria and Italy meet. The area has been inhabited for more seasons than the inhabitants of the village know. That part of their past and heritage is shrouded in the fog of unrecorded time. The deep, fertile valleys are fed with snow melt from the tall peaks. Herds increase even faster than the residents and the people grow rich. We are in that period between the copper age and the iron age where smelted tools are common and are traded with other villages and regions as far away as that coastal region which will one day be known as Venice, some eighty miles distant as the condor soars.

The age of true kings has not yet come to the West. Alliances based on trade between villages and village groups generate situations where leaders emerge, establish and enforce local rules, which are generally guided by the consensus of the people governed.

Mer, a settlement, at the confluence of the Passer and Adige Rivers has grown in importance largely because of its location and the rudimentary trade fair that they host. Admission to the fair requires the payment of a quantity of dried venison or ibex, a piece of smelted copper or one of a number of other valued items. The ability to trade in Mer and exchange things of value greatly exceeds the nominal pay-to-play that goes into the collective coffers of Mer.

The time of specialization has come. Individuals no longer subsist and see to all of their own needs. One man is a tanner, another is farmer, yet another, who is not quite a black smith works in metal. There is another category of man who lives in Mer. They are the predators, the raiders, the petty soldiers of Mer.

As the people of Mer grow fat and acquire goods, larger herds and bigger homes, they are occasionally subjected to raids. Trading too can be dangerous because things of value are moved from safe place to save place over treacherous trails which are often watched by raiders and bandits.

Ernst is a man of some note in Mer because of his own success in raiding. He and his band are paid by the headman of Mer to protect the village, which grows in size every year. Ernst stands just over five feet, has dark eyes and brown hair. If men come and take your sheep or your daughter, you go to Ernst and he reeves and retrieves — for a percentage. Most of his wealth has come through his accumulation of slaves, which he sells at the market. These slaves are taken in distant raids, conducted along the foothills of the Alps. Sometimes he crosses into present-day Austria to raid. These raids yield enough that they are worth the considerable effort required to cross the 10,500 ft. saddle between peaks where the ‘raiding trail’ winds up and up, then down and down. Only raiders travel over the raiding trail. Ernst’s men are not the only ones who take the trail.

We will follow Ernst and his companions on his mid-summer raid across the Alps and though neither he nor his fellows can se us, who knows whether or not they can sense the presence of others unseen?  Ernst leads because he is a man familiar with his craft. He is forty-eight years old, suffers from arthritis, which he tries to ignore and has the maladies familiar to men of his age (and maybe to those who watch with us as well?).

Each of our eleven raiders is armed according to his wealth, his preference and his skill level. Ernst carries a copper blade axe, a yew-wood longbow** five and a half feet long (taller than Ernst himself) with twenty iron-tipped arrows in a quiver made of tanned red deer hide.

**The wood (yew), construction and bow string are all but identical to those used by English archers to decisively defeat armored French knights at Agincourt, Crecy, Sluys and Poitiers four thousand years in the future from our tale.

He has a dagger with a flint blade and an ash handle in a sheath, and a leather sling for pelting rocks. There are fletchings and shafts for more arrows in his kit, but no more iron arrowheads. If he needs to make more heads, he will have to nap flint. His arrows are not long and heavy, designed for distant targets. They are short, light and very fast. The arrow flights/fletching are angled to allow for rotation and stabilization in flight, and they are deadly accurate. The best raiders are the best hunters, since skills required for one are also needed for the other.

A lucrative raid requires that one locates the target, executes the attack, acquires the goods or slaves and then makes it back to the comparative safety of Mer. The outbound journey will take a week. Maybe more. Each of the men wears a pack made of red deer hide. In it they each carry embers, wrapped in maple leaves and placed in a birch bark container to make an instant fire, significant amounts of moss to wrap food, and as toilet paper. Ernst, in particular, likes his comfort when tending to his private business while on the raiding road. They pack dried meat, grain, berries and fruit. Some provisions can be acquired on the journey, but these men are veterans and they know that proper preparation averts a crisis.

Injuries in raids or climbing in the Alps are common. He carries a bone needle and finely pulled animal sinew wrapped in fungus to suture wounds and kill bacteria. Ernst knows nothing of bacteria, but he has consulted with shamans and both he and his men know what works.
Ernst and his men set out at daybreak after being blessed by the Shaman of Mer. To our practiced eye, they are perfectly adapted to the country and to the business they are undertaking. They are advanced in most ways beyond the native Americans that Europeans will meet in the New World almost five thousand years in the future. None of that matters to us, or to the raiders. They are intent on plunder and adventure.
Ernst squinted against the morning sun, looking at the snow-capped peaks to the northwest and then down at Drak, who all agreed had become the best tracker of the lot. “You will take point, we will match our speed to yours.”
Drak smiled at Ernst, knowing the subtext to what Ernst said. The leader, wise in the way of raiding and in the affairs of men–and more than twice his age, was asking Drak to go easy on the trail and not beat any speed records. “I will go fast on the trail but will not be imprudent. We don’t know who we will meet in the high and far lands and there is always the danger of an ambush.”
Ernst smiled back. Drak said enough for him to save face with the rest of the men. They were all hard, all hand-picked and hailed from villages as far away from Mer as fifty miles. Their various meetings and comings together to the point where they’d formed a raiding band were typical of men of their age who were too ambitious and too energetic to be tied down to any given place. They were drawn to strong leadership and to aggressive action.

“Treasure and slaves wait for no man!” Ernst spoke confidently to the men who followed him.