Home Blog Post The Egyptian ...
Facebook
Twitter
Pinterest
WhatsApp
This may be completely unfair, however I couldn’t help draw a comparison between the understanding of democracy as we’ve come to understand it — from a Muslim Brotherhood perspective, and that that we’ve felt from a Chicago perspective in the White House.
Though the mainstream media is not reporting it this way, Mursi’s replacement exposed the narrow understanding of democracy that he and the Brotherhood practiced. One commentator called it majoritarianism. This is the exercise of absolute control based on the electoral majority. It includes no requirement to compromise with the opposition even in a close election, as Mursi’s was.

The Obama Administration’s concept of ‘fundamentally transforming America’ was not something that most voters genuinely bought off on. Certainly during the first two years of Obama’s first term, many felt that the Democrats (almost always ineptly) tried to ram home legislation based on a narrow electoral majority. This almost immediately gave rise to the Tea Party, a genuine, spontaneous grass roots response to a form of Party absolutism that America hadn’t experienced for well over a hundred years. 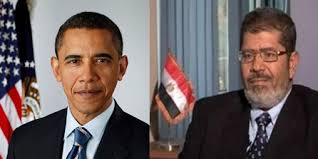 The Arab Spring showed Egyptian jihadists that they could achieve their goals of installing an authoritarian Islamist government through elections. Their idea of democracy was that it was a means of achieving a religious end state that did not include compromise, checks and balances and cooperation with those who lost the election.

Elected government was never meant to be permanent in this political theory. Muslim Brotherhood members in Syria and Egypt have now confirmed this strategy in their denunciations of the Egyptian army. Their understanding of democracy is not remotely congruent with that of western elites, a point that gets lost in the press coverage.

In Egypt, the Army has always run things. Always has and likely always will. They receive 70% of their funding from the United States of America. Part of the funding is based in the treaty with Israel that the US signed when Carter was president. There is no parallel with this institution being run in this way. The US is a stable country and Egypt hasn’t been (ever). A lot of that has to do with geopolitics and Egypt’s place in the world both ancient and modern.

The Parallels between Mursi’s government and Obama’s administration (re-upped by popular vote for a second term) has more to do with how the respective governments viewed their stewardship. History won’t treat Mursi kindly. I don’t think that it will view Obama kindly either. It’s a lesson that future politicians need to remember. Even though Bill Clinton was a Democrat, his term as president was nothing like Obama’s. The difference comes in the willingness to compromise and the lack of will to use the Federal government as a cudgel against the American people.