Samuel Colt’s first revolver, the Colt Patterson Holster Pistol, enjoyed limited success. Captain Samuel Hamilton Walker offered a few suggestions to improve the Colt Patterson and it resulted in the Colt Walker Model 1847. The Colt Walker was never designed to be worn on the hip. It was a “horse pistol”, designed to be carried on saddle mounted holsters and of a caliber sufficient to kill both horses and enemy soldiers.  The Colt Walker, .44 (140 grain round ball) caliber, black powder, percussion cap, single action revolver fired a round ball at a muzzle velocity of 800 to 1,200 feet per second.

In 1848, Colt broke away from Eli Whitney and created Colt’s Patent Firearms Manufacturing Company and improved the Colt Walker, resulting in the production of the Colt’s Dragoon.
There were three Models of Colt’s Dragoon and a the 1848 Pocket Pistol (so-called Baby Dragoon). Designed for the US Army’s “Mounted Rifles”.  This weapons was carried by the mounted rifle regiments in pommel holsters for close range combat even though they were effective at much longer ranges.
In firing my Dragoon (which I have had and used for over 30 years), I find that it’s accurate to roughly the same ranges as smokeless powder handguns. the long sighting radius of this handgun compensates for the lack of modern design. In the period when they were in common use, conical bullets were made and used for these handguns, improving the range and accuracy of the Dragoon.
My Colt’s Dragoon is not a replica per se since it was made by Colt in 1976 (I bought it new in ’76) for the American Bicentennial. However it is a modern version of their original handgun. I was told that the value would decrease if I fired it. Too bad for me. I’ve fired it and enjoyed it and it’s worth what it’s worth. (there are no hearses with luggage racks)
The Colt’s Dragoon had a shorter cylinder than the Colt Walker which prevented over-loading the cylinders with black powder. As a practical matter, most pistoleros carried multiple cylinders pre-loaded and primed (forerunner of the speed loader for revolvers) such that you could continue to fight the weapon after firing the initial six rounds.
Loading 50 grains of 3F black powder in each cylinder produces a satisfactory charge and allows the shooter to engage targets effectively in the 25 meter range. Though then as now, the standard pistol combat range was 3-15 feet. A pistol has always been a close range weapon as a matter of practical use. The 4 1/2 pound weight of the Dragoon made it less than optimal for a belt holster weapon.
The 1851 Colt Navy Model (.36 caliber) and 1860 Colt Army model (also a .44 caliber) were both more popular than the Dragoon because of their size. They were both the same size (just different calibers) and were made in very large numbers because the demand for their use during the War of Northern Aggression/War of the Rebellion/American Civil War (pick your name). These later models used a paper cartridge.
As a matter of practical use, it was important to cover each loaded cylinder opening with grease to prevent a “flash-over” detonation in which more than one cylinder would fire at the same time, potentially damaging (blowing up) the handgun and injuring the operator. Today I’ve used a number of different solutions with “tallow” being the best, surprisingly. The solution of the 1850’s is a good solution today. I’ve tried commercial lube solutions, vaseline, and so forth, but none of them is dense enough to be as good as tallow.
The advent of fixed ammunition (bullet married to a brass cartridge casing) both rimfire and center primed, solved many of the problems that plagued these early pistols. Smokeless powder, much later, solved the fouling issue that is present with all black powder weapons.

True Grit (1969)
Pale Rider
I selected this scene to demonstrate how cylinders are swapped out for a reload. Clint Eastwood is not carrying a Colt’s dragoon, but it’s worth watching to see how the technique worked as a practical matter.
Modern Speed Loader using fixed ammunition (for reference as not all of this blog’s readers may be familiar with the concept) 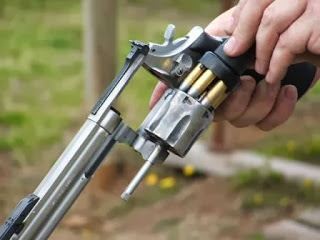 These handguns (above) didn’t “win the west” but they started the ball rolling. The Colt Peacemaker was a .45 caliber (45 Colt Cartridge) pistol that fired fixed ammunition. It had most features present in modern handguns with the exception that it was single action (you had to cock the hammer back every time you wanted to fire a round).

A lot of gunfighters carried shotguns in the 8-10 gauge range because at the standard pistol range (close) the shotgun delivered a much more deadly punch. Once the first two charges were fired, the gunslinger could resort to the handgun. Despite the “fair fight in the street” theme found in many Western films, winning was more important to the (surviving) combatants than chivalric notions.
“The dumber people are, the more surprised they are when you kill them.”
— Attributed to Billy the Kid