The Clinton Global Initiative is Defunct 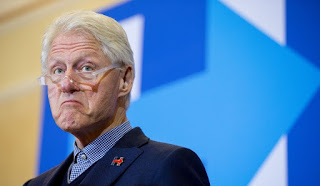 Facebook
Twitter
Pinterest
WhatsApp
It’s interesting to see what is “news” and what isn’t. Bill Clinton in a hotel room with a dead Russian hooker is not news. Readers might say, “oh, another one?” That’s all the traction that you’d get. Progs are contemptible and nothing that they do surprises anyone.

If any of you wanted to give money to the Clinton Global Initiative (CGI), you’d better hurry. I’ve heard that Bill and Hillary will be dead broke unless you do.

(The Blaze) The Clinton Global Initiative will shutter operations at their main office in New York City for good on Tax Day, April 15, 2017.

A WARN filing with the Department of Labor indicates that the 22 remaining employees employed there will be terminated on that date and that the official reason given for the layoffs is a “discontinuation of the Clinton Global Initative.”

A report from the New York Observer notes, that criticisms began to reemerge in the wake of Clinton’s electoral loss to now President-elect Donald Trump due to the nearly immediate decision by those same wealthy and foreign donors to distance themselves from the foundation — or fundraising — arm of the initiative:

[A]s soon as Clinton lost the election, many of the criticisms directed toward the Clinton Foundation were reaffirmed. Foreign governments began pulling out of annual donations, signaling the organization’s clout was predicated on donor access to the Clintons, rather than its philanthropic work. In November, the Australian government confirmed it “has not renewed any of its partnerships with the scandal-plagued Clinton Foundation, effectively ending 10 years of taxpayer-funded contributions worth more than $88 million.” The government of Norway also drastically reduced their annual donations, which reached $20 million a year in 2015.

It was a pay-to-play scheme predicated upon the inevitability of Hillary Clinton becoming the 45th President of the United States. Foreign government donors and wealthy benefactors threw money at the Clintons with the expectation of influence during a Clinton presidency. While Hillary Clinton was US Secretary of State, she criss-crossed the globe preaching the value of contributing to her “charity”.
Clinton was dogged during the waning days of the 2016 election by allegations stemming from an email exchange detailing a memo made public by WikiLeaks in October that the Clinton Foundation was running a scheme to amass a fortune using the Clintons’ political influence:
From the Post:

The memo from [top Clinton aide and Clinton Foundation employee] Douglas Band, made public Wednesday by the anti-secrecy group WikiLeaks, lays out the aggressive strategy behind lining up the consulting contracts and paid speaking engagements for Bill Clinton that added tens of millions of dollars to the family’s fortune, including during the years that Hillary Clinton led the State Department. It describes how Band helped run what he called “Bill Clinton Inc.,” obtaining “in-kind services for the President and his family — for personal travel, hospitality, vacation and the like.”

For those of you who have harsh thoughts about Wikileaks, consider that without that organization, the public’s understanding of the unbridled corruption of the Clintons would never have had a light shined on it.
What will happen to those billions of dollars raised for ‘charity’ after CGI is shut down? I don’t hear the news media asking those questions. Where’s CNN’s incisive reporting?