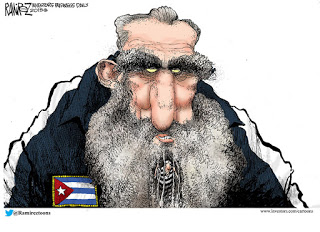 I haven’t written much about Fidel (The Beard) Castro in a long time. He turned 89 last week. Will he make 90? Who knows? The CIA tried half a dozen schemes to kill the SOB in the ’60’s and they all folded.

Cuba is still a totalitarian hell-hole and I can understand President Obama’s affinity toward The Beard (and friends) in the same way that he was a friend to (the late) Hugo Chavez, former dictator of Venezuela. When you are raised by communists, as President Obama was, you are naturally heir to a belief system that touts the virtue of people such as Fidel Castro and Kim Jong Un, North Korea’s fat little dictator.

Cuban dissidents now see an America that has chosen the Castro regime over them.
It’s just one more thing that I hope the next president fixes as he/she spends the bulk of a term in office un-doing what Obama did. Of course, if the next US President is Hillary Clinton, we will likely double down in our love for Cuba and give them Guantanamo Bay and the prison there so that they can incarcerate more dissidents.

If John F. Kennedy hadn’t been such a weakling, we would have outright invaded Cuba (not at the Bay of Pigs) with the full might of the US Military, thrown The Beard into jail for murder and set things right.

Cuba, which is a really delightful spot – absent the communist dictatorship – would be a much nicer place than, say, Puerto Rico, to go on vacation. Not many people go to Puerto Rico on vacation because of the deteriorated social conditions there. Cuba is a different situation.

I’m not suggesting that we invade Cuba and toss out the communists today, because, who cares really? However, there are a lot of people in Cuba who have pegged their hopes on America and Barack pulled the rug out from under them. It’s simply one of many outrageous acts perpetrated by USGOV in the Obama Years.