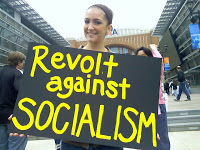 Facebook
Twitter
Pinterest
WhatsApp
Where can the Tea Party Compromise?
Both Les Carpenter and Left Coast Rebel beat me to the Rand Paul piece from CNN’s State-of-the-Union.
According to Rand Paul, conservatives have to be willing to accept cuts in the military’s budget and liberals have to cut domestic welfare spending (that helps by them votes that keep them in power).

When asked about the debt limit, the next major battle in Congress, Paul reiterated his stance that he would only vote for an increase in the $14.3 trillion limit if the legislation is passed with a balanced budget amendment and “say from here on out this is the last time we’re doing it.”

I’ve heard some strident angry sentiments from hard core Tea Party members – that may not actually be tea party people, but they identify themselves as such. They suggest NO compromise and want only the most of conservative of voices within the Republican Party to be heard. If they prevail, the moderate independent voters will be split by the Democratic Party, ushering in another four years of Obama.

I think that the Tea Party needs to be true to its roots and push the balanced budget as Rand Paul suggests, but I think that conservative people are ill served if they remove so much of their voting base through bias that they end up with NOTHING that they wanted and fought for. The Constitution itself was a compromise between the interests of different states. Rand Paul is correct. We need to decide just how many wars we need to fight at the same time – keeping our nuclear options sharp, we need to balance the budget and that means curbing domestic spending considerably and get back on a sound fiscal track.
There are a lot of “Republican” candidates from the RINOs (Trump and Romney) on one side to the Libertarians like Ron Paul on the other. One day soon we need to get behind one of them. No candidate will bring everything ‘we’ want, but it’s very important to move the lunatic liberals from power in the executive branch of government even if we’re not individually in love with whichever candidate emerges.