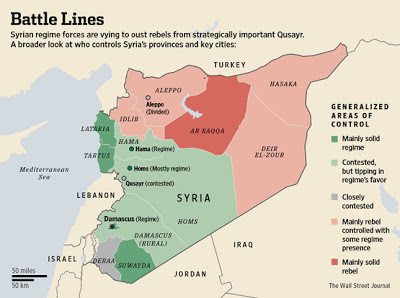 Facebook
Twitter
Pinterest
WhatsApp
The Qalamun Liberation Front and the al-Nusra Front are a component of the opposition to the Assad government in Syria. Both are components of al Qaeda that sprang into being post 9/11/01. It’s practically impossible to separate the components of the Syrian Opposition as they are all cooperating and integrated (as much as anything like this can be integrated in the Middle East). John Kerry, Barack Obama, John McCain and others suggest that the allies can be split and that we can aid one (“good resistance group”) without supporting the others (“bad resistance groups”). Such a view is naive.
There is some sign of hope in Syria, though, and it doesn’t come directly from the US. (I’ll the US role later) Syrian Foreign Minister Mu’allim and Russian Foreign Minister Sergei Lavrov announced that Syria is willing to join the Chemical Weapons Convention, will disclose the location of its chemical weapons; will halt production of chemical weapons, and will show its facilities to representatives of Russia, the United Nations and other states (possibly including the US). This signifies that Syria is agreeing not to wage war with Israel. The only advantage that Syria had in a conflict with Israel was their use of chemical weapons delivered by their North Korean ballistic missiles.
Have you heard about this in the mainstream media? No? Shocking. Well it’s significant. And it’s a shame that you have to go a simple blog for these sorts of updates.
If the Assad government falls, then the deal is off and the al Qaeda affiliates inherit the very significant stockpile of chemical weapons that they can then shoot at Israel (or anyone else). (al Jazira) Yesterday, even so-called moderate rebel groups announced that they recognized Israel as their enemy and would attack it if they came to power.
President Obama should accept the Syrian offer and then test it to insure that it’s sincere. Since the Syrians promise transparency their offer can be vetted. There is still NO CONFIRMED information that indicates that the Syrians launched a gas attack on the rebels despite what the Obama Administration asserts.
By accepting the Syrian offer, the US plays toward Israeli interests and calms the situation in the Middle East. There doesn’t seem to be a down side.
Syria knows that the US has a very well trained and well-blooded military with a decade of combat experience in next-door Iraq and more distant Afghanistan. They do not underestimate what that force is capable of delivering and they don’t want to taste it. The world knows that the US has weak leadership at the top, but is capable of doing what nobody else can do with the power at hand. Americans are traditionally warlike and effective going back to the founding of the nation. The resources at hand to crush rogue states such as Syria, Myanmar and North Korea, for example have been amply demonstrated.
Understanding this as the Syrians do has brought them to the bargaining table.